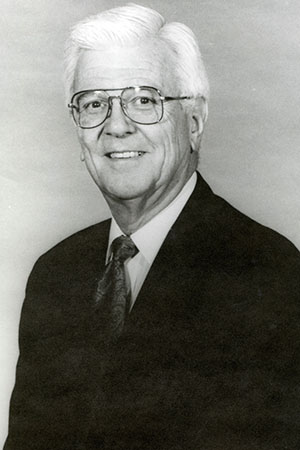 Lamkin earned Bachelor’s and Master’s degrees from Baylor and his Ph.D. from the University of Texas at Austin. His fields of interests were English, Psychological Counseling, and General Psychological Assessment.

Lamkin taught and served as an administrator in public schools in Texas and New Mexico before beginning his career at Baylor in 1967. At Baylor he was an SOE counselor, professor and associate dean before being appointed dean in 1981 following a national search.

A believer in “learning by doing,” Lamkin oversaw the placement of Baylor students in classrooms where they served and taught.

Lamkin also either established or assisted others’ efforts in the establishment of the Center for Christian Education, the Center for Adult Learning, the Learning Lab, Hillcrest Professional Development School, the University for Young People, Baylor Pedagogue, the Hale Endowed Professorship and the Center for Educational Leaders, the Interdisciplinary Creative Problem Solving Institute, Commission 21, the Strickland Professorship, and much more.

A desire to see more of the world for himself and his students was ignited after Lamkin lead the Baylor in London program in 1988. He encouraged early development of teaching and learning abroad programs, leading to international experiences for SOE students that continue to this day in London, Hawaii and, more recently, Australia.

“He was so supportive of all of the faculty members, and the staff members, too. Very supportive,” remembers Darlene Kyser, who in 2017 celebrated 50 years in the SOE as an assistant to the dean, a communication specialist, and a member of the faculty search committee. “He was an educational psychologist and counselor - and statistics - those were his special areas. He worked with troubled youth in the community. And he went down regularly to a home in Goldthwaite and worked and counseled people there. He was a great counselor for so many people. Just a great mentor for so many graduate students. I remember them coming to him and just really seeking him out. He mentored so many of them, especially in the counseling and educational psychology area. He was so very kind, yes.”

Lamkin held positions at the state and national level in the Holmes Group, the American Association of Colleges for Teacher Education and the Land Grant Deans.

“It has been with considerable pleasure that I have observed your astute and discerning leadership of the faculty, staff and students of the School of Education, as well as observing your interactions with the entire University community and all of our Baylor constituency,” wrote Baylor President Herbert H. Reynolds upon Lamkin’s retirement. “You have made a lasting contribution to both the School and the University and I am delighted that you will continue as a member of both our undergraduate and graduate faculties for a least a few more years.”