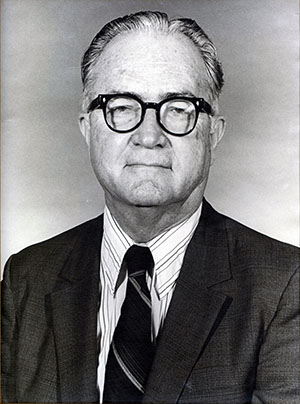 A native of Greenville, South Carolina, L.V. McNamee graduated Baylor in 1938 and went on to earn his Master’s and Ed.D. from the University of Houston. He did graduate study at many other schools as well, including Columbia University and the universities of Colorado, Southern California, Denver, Texas, and Sam Houston State.

McNamee completed extensive research on the curricular needs of gifted students and served on a research committee for the Texas Association for Supervision and Curriculum Development. Before returning to Waco and Baylor, McNamee was principal of four Texas public school districts and was assistant superintendent for four years in La Marque, Texas.

Additionally, McNamee was an associate professor of Education and Psychology at Texas A&M University in College Station.

In Waco, McNamee was director of personnel and later assistant superintendent for the Waco Independent School District. In 1965, he returned to Baylor as an associate professor of Education and in 1971 assumed chairmanship of the School of Education.

McNamee had a firm belief in the power of reading. He added remedial reading and two other specialized areas to Baylor’s educational curriculum. He believed that teachers should be a diagnostician as well as a classroom practitioner in reading instruction. McNamee also expanded the special education and kindergarten programs and designed a program for 67 elementary-aged gifted and talented children.

McNamee was determined to further Baylor’s reputation as the largest supplier of Texas public school teachers among private schools in the state.

Outside of education, McNamee was a member of the Waco Rotary Club, the budget committee of the United Way Fund, and served on the board of directors for the American Red Cross and the Camp Fire Girls. He was married to Marguerite Concilio, also a teacher, who received her degree from Baylor in 1937. They had two children, Barbara and Gary.