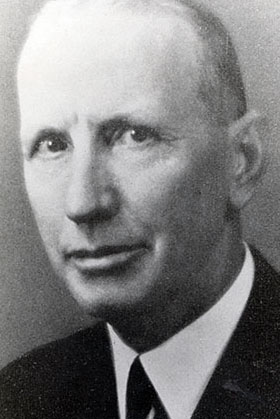 Brooks was a professor and specialist in school administration. In addition to his many and varied roles at Baylor University and in larger educational circles, Brooks served as mayor of Waco from 1928-1929.

Well liked by students, Brooks – along with other Baylor benefactors – is described as such in the 1945 Baylor Round-Up: “Dr. T.D. Brooks’ constant challenge to high thinking stimulated and infused an abiding enthusiasm in his students. Dr. Brooks had a reputation among students for honesty and sincerity in statement and deed.”

Brooks, a 1903 graduate of Baylor, was recruited to teach at his alma mater by Baylor President Samuel Palmer Brooks, who sought a more academic faculty for his growing university. T.D. Brooks earned his Ph.D. from the University of Chicago in 1921.

T.D. Brooks also served as dean of Baylor’s summer school, and was chairman of the Committee on Placement of Teachers, formed in 1920 in response to numerous inquiries from schools seeking to hire Baylor graduates.

Brooks was a contributing editor and in charge of collecting book reviews for Texas Outlook (now known as the Advocate), the official publication of the Texas State Teachers Association. He was a member of the Texas State Educational Survey Commission from 1923-1927.

In all his positions, Brooks is remembered for corresponding regularly with students, faculty, colleagues, book publishers, and teachers. Born on January 18, 1882, he married Elizabeth Oberthier on Dec. 27, 1905. The couple had no children.