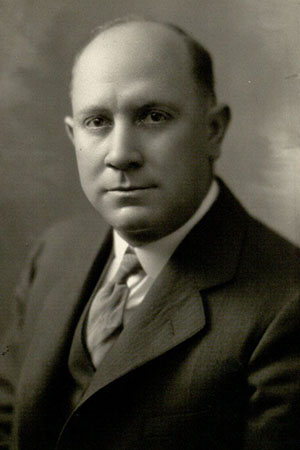 Allen graduated from Baylor in 1912 and earned a Master’s degree from Columbia University in 1915 and a Ph.D. from Columbia in 1923. After briefly working in Central Texas public schools, he joined the Baylor faculty in 1916 as an assistant professor of Latin. He served as a professor of secondary education at Baylor before serving as dean of the college of Arts and Sciences. Education degrees were issued from within the College of Arts and Sciences until 1972.

While serving as Baylor president Allen was presented with a rewritten version of the often tweaked “That Good Old Baylor Line.” He so liked the revised version that the new lyrics were printed on the front of the Lariat and sung in chapel on Nov. 5, 1931.

Allen's colleague Lily McIlory Russell remembered him this way: “Everything’s lovely” sounds the keynote of Dean Allen’s personality. Cordial, optimistic, he works and plays with the same eager zest. He gives to the problem of the moment his immediate interest, and attacks it with energy and utter absorption. Seeing the other fellow’s point of view, he understands and has the understanding of students. Is never flustered or taken off guard; honest, he sees this quality in others, calling out the best in those he would discipline. His good humor conciliates the antagonistic and the angry, who long remember his comradely handclasp and parting benediction, “Let’s just go forward now!” A big hearty human, generous man, of unassailable geniality.”