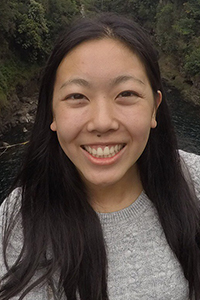 Hailing from the perpetually sunny state of California, Joyce is a first year PhD student in Sociology. She earned her BA from the University of Southern California, graduating with a double major in Communication and Religion. During those early academic years, Joyce focused primarily on researching religious conflict and religious pluralism. She concluded her undergraduate degree by assisting Dr. Richard Flory at the Center of Civic Culture and Religion, where she (and the other research assistants) physically walked the streets of Los Angeles to map out the numerous religious congregations.

Upon graduating from USC, Joyce immediately enrolled at Fuller Theological Seminary to receive a Master of Arts in Theology. While her initial interests were narrowly focused on religion, she soon discovered the value and relevance of contextual theology. Choosing to further develop those interests, Joyce added another degree. During her Masters of Arts in Intercultural Studies, Joyce explored issues of race and ethnicity, particularly through the lens as an Asian American. Actively involved with the Asian American Center at Fuller, Joyce worked to cultivate and develop the Asian American community on campus.