An Art and a Science to Promote Human Flourishing 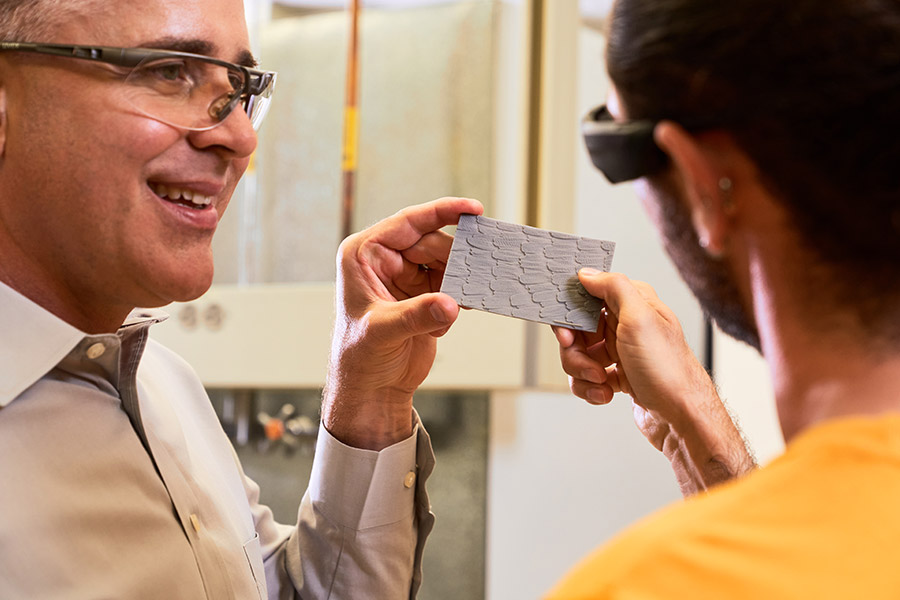 What does it take to help individuals, or societies, thrive? It’s one question that gives rise to a thousand others. At Baylor, faculty are tackling those questions not just through the lens of their discipline, but with a foundation of compassion and Christian mission. From the largest global study of its kind to churches, schools and laboratories, Baylor’s focus on human flourishing is demonstrating that at the intersection of STEM, social sciences and a focus on people, real change can take place.

Byron Johnson, Ph.D., founded Baylor’s Institute for Studies of Religion and serves as Distinguished Professor of Social Sciences. Since coming to Baylor from Penn in 2004, he has built ISR into a highly funded, influential, interdisciplinary research center. Last year, he launched a capstone project in partnership with colleagues at Harvard University, Gallup and more. The Global Flourishing Study—a $43.4 million, global, longitudinal study of approximately 240,000 people—is the largest project of its kind and will yield data that will make possible scientific research to determine the causes and factors that lead to human flourishing.

Stephanie Boddie, Ph.D., came to Baylor in 2017 as Assistant Professor of Church and Community Ministries—a joint position in Baylor’s Diana R. Garland School of Social Work, School of Education, and George W. Truett Theological Seminary. Her research examines faith-based social innovation and entrepreneurship, along with related topics like race, social services, food insecurity and more. A professor at leading institutions like Washington University in St. Louis and a senior researcher at the Pew Research Center’s Forum on Religion and Public Life prior to coming to Baylor, she has built new classes and programs at Baylor and was recognized in 2020 as an Undergraduate Research Mentor of the year.

Bryan Shaw, Ph.D., Professor of Chemistry and Biochemistry, has built a dual-track research career at Baylor. In 2008, his infant son, Noah, was diagnosed with a rare pediatric eye cancer, retinoblastoma. While Noah survived the disease, he lost sight in one eye. Shaw partnered to create an app enabling parents to screen photos for retinoblastoma to catch the disease quickly. Earlier this year, he was awarded a $1.3 million grant from the National Institutes of Health to combine high-tech resources with low-tech “lab hacks” to make science concepts and laboratories accessible to children with blindness or visual impairment.

How would you describe your research focus?

Byron Johnson: I came here 18 years ago to launch a think tank on religion—Baylor’s Institute for Studies of Religion— because religion, especially within the social and behavioral sciences, has been massively understudied for many decades. Because of this oversight, we are striving to conduct and publish studies that capture all the important and complex ways in which religion helps individuals and societies perform better.

And the Global Flourishing Study, really is a dream come true. I remember as a grad student, I was fascinated with in longitudinal studies because they are quite rare. Since they require interviewing the same people year after year, it is extremely difficult and expensive to keep track of people even if they leave in one city or region. The Global Flourishing Study is doing this on a global scale. It’s an unprecedented project because of the many different languages and translations necessary to capture the voices of almost a quarter of a million people over time. None of this has happened before on any topic. The project will allow us to move beyond correlational studies and allow us to produce causal studies on the determinants of human flourishing. If you were to write a script for a perfect study, this would be it.

Stephanie Boddie: My research primarily addresses how congregations use their assets and resources to address contemporary challenges in their communities. And primarily, I work with black congregations, which has led me to address various challenges ranging from food insecurity, health and wealth disparities, and race relations. I'm very interested in participatory community-based research that allows us to bring in community members as part of the research team. Having this interdisciplinary opportunity, particularly Baylor’s strong connections with community organizations and congregations, has really aided my research.

Bryan Shaw: On the human flourishing side, I would say what our lab is about is trying to find simple, creative ways to solve problems for people. Generally, overlooked problems—things that the market forces may not be able to find a solution for. So, the rare cancers, blindness, and STEM, these sorts of things. But I'm addicted and obsessed with finding real solutions that get implemented instantly or in a few months, a year, and start working. I'm really all about product effect. There’s also the chemistry we do too. So, I split right down the middle. It's about half regular chemistry, half what they call outreach—but it's just helping people.

What drew you to do human flourishing research at Baylor?

Stephanie Boddie: What drew me to Baylor was the opportunity to be at a university with a mission focused on Christian education, and that my position is interdisciplinary. I'm affiliated primarily with the School of Social Work. I also have an affiliation with the School of Education and Truett Seminary, as well as teaching a course in medical humanities. This allowed me to use the training I received at University of Pennsylvania as an interdisciplinary scholar through the social welfare program there. I can also apply that learning here to bring the research I have conducted previously. Much of my research has been mixed methods. I'm really interested in helping social workers, seminarians, and educators understand this research and how they can apply it in communities and particularly congregations.

Byron Johnson: It's all about the mission, and I think Baylor is distinctive. The R1 thing is great, but it pales when you stack it up against the mission. There are a lot of R1 schools, but there aren't that many really outstanding national universities that are really Christian in their focus and in mission. And so that was the big attraction for me.

Bryan Shaw: Baylor was my first job. I was a postdoc in Boston, and when I went on the job market, it was in September. That September, my son was diagnosed with cancer, and then in October, the economy crashed. And man, I just needed a job. I had a wife, a kid. Why we come here is one thing, but why we stay is something else. It’s the people, and the facilities, and the Christian mission.

Do you, as a chemist, view yourself as being in the human flourishing vein?

Bryan Shaw: Oh yes. Very much so. You just can't be a lab rat who has no bigger picture about the impact of what you're doing. So, it's very much human flourishing. All the problems I work on from the fundamental ones to the applied ones in chemistry are related to human disease. For me, as a chemist, not always doing traditional chemistry, but focusing on creating an app or an NIH grant to make labs accessible, being at Baylor has been tremendous—it’s just love. There’s an ethos here.

Dr. Johnson, with the Global Flourishing Project, what are you trying to uncover?

Byron Johnson: People may think, ‘Oh, I know what they're interested in. They're interested in seeing how religious people flourish.’ What we're really interested in finding out is who is flourishing and who isn't. What countries seem to be flourishing more than other countries? And then look at the determinants of flourishing. It will allow us to think in so many different ways about all kinds of things. And not just religion, but virtues like generosity and forgiveness and gratitude, and a host of other virtues.

Many people are suffering in the world. According to Gallup's most recent research, there has been a significant global rise in unhappiness over the last decade or so. We believe this project will help us understand a little bit better why so many are struggling, as well as to what we do about it. For Baylor to be a part of something like that, to be at the center of it with our friends at Harvard, is really a gift.

Dr. Boddie, much of your research takes place on the ground, in the community. You were also named an undergraduate research mentor of the year at Baylor, and that’s clearly important to you—training your students in research. Where might we find you and your students on a given day?

Stephanie Boddie: You might find our students and me at an elementary school like Connally Elementary School. We had a Baylor day there, introducing students to aquaponics to connect with the science, technology, engineering, agriculture, and math (STEAM) work reflected in their curriculum. You could also find our students at a local congregation building an urban garden. So last year, I taught a course called Education from a Gardener's Perspective. It’s a meaningful metaphor. We are learning to connect permaculture gardening principles to course content. I like the way this course and related research connect with flourishing because the Latin root is florere, to bloom, to blossom, or to flower. And so, we are learning about gardens to help us think about our own connection to creation, how we are growing, and how we're helping the community to grow as we serve in our role as educators, social workers, and seminarians.

In 2018, the class midterm assignment was to write a grant to the Whole Kids Foundation, which is sponsored by Whole Foods. Our students wrote this grant. I edited the grant. We submitted it, and out of 900 applicants, we secured funding for a greenhouse at Connally Elementary. From there, we partnered with Dr. Anne Spence in the School of Engineering, and her students built the greenhouse the next semester. The following year, we established the Growing Leaders and Learners program.

What are the challenges or opportunities that keep you up at night? Or the proverbial challenges you find yourself continually thinking about?

Stephanie Boddie: I'm interested in the personal troubles that people in congregations bring forward and how those get translated into public issues like food insecurity, mass incarceration, or race relations. There are so many ways that congregants become impacted through their own personal experiences and then join that with their faith to engage other church members in various community ministries and movements.

Bryan Shaw: Well, right now it's making a world in the lab where everyone can participate. As my son's getting older and I meet other parents of children with disabilities, thinking about them when they're in their 30s and 40s—that keeps me up at night. Because, what they'll be doing then depends upon what we're going to do for them now. And most scientists are just too busy to really even care. At Baylor, it's not that way, and that's nice.

Byron Johnson: I think it's important for us, as much as we can, to also move the needle on public policy, and that means bringing other people alongside of us. It's one thing to produce the good academic work, which the three of us, of course, and so many others here are called to do. But then how does that work affect public policy? I think this project will take us in some of the most unlikely places to get answers to problems. That keeps me up at night in a very exciting way. And I’m grateful that we get to be a part of this work.

At Baylor, the heart of research is grounded in our mission, compassion for others, and a call to solve our world’s greatest challenges. Discover other conversations with faculty in cancer research, environmental health, data sciences and materials science and engineering.
Are you looking for more News?
All NewsArchives