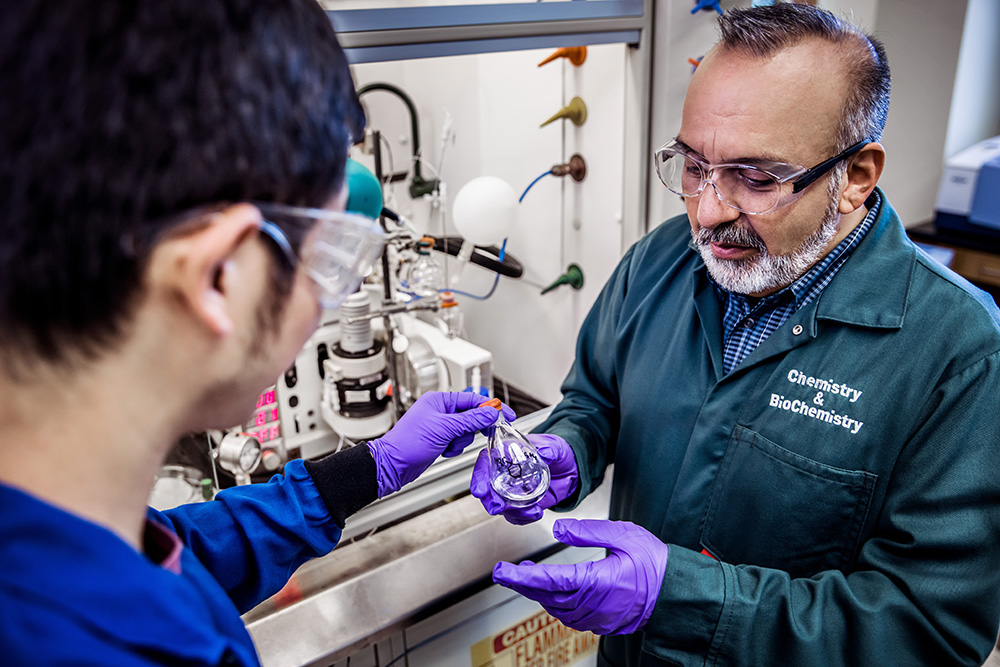 Daniel Romo, The Schotts Professor of Chemistry and Co-Director of the Baylor Synthesis and Drug-Lead Discovery Laboratory at Baylor, is a recognized leader in synthetic organic chemistry, a highly funded researcher and a pioneer in discovery that can lead to potential drug leads for a variety of human diseases. Romo’s team focuses on the synthesis of organic molecules isolated from natural sources, and the often structurally simplified, novel synthetic analogs that result have the potential to impact human medicine including cancer treatment.

His research is not inherently “Christian” in the sense that the principles of investigation and discovery are not bound to religion, and the scientific method is employed by people of all faiths, or no faith. Romo, however, is motivated by his Christian faith. He feels an inherent calling to explore God’s creation to serve others, and demonstrate that faith and science are not at odds, but are compatible, often motivating discovery.

“Anyone can access knowledge and data and examine it for the best scientific explanation,” Romo says. “That can happen at a Christian university, just like it does at a secular university. It’s important to me to show that there are overlaps between faith and science. The fact that we are now an R1 university, that will continue to be very much a faith-based institution, gives us further credibility and that is very exciting to me.”

When Baylor was recognized as an R1 research institution by the Carnegie Classification of Institutions of Higher Education last December, it represented the attainment of a long-pursued goal: to join the nation’s elite research institutions in the top tier of recognition. The heart behind that goal was far more than mere status. Baylor leaders and faculty have long desired to infuse the quest for solutions to the worlds’ greatest challenges with Christian voices at the table.

“As a Christian university, there are not many among the R1 universities that are not only doing the highest level of research in the country, but also maintaining the integrity of their Christian mission and really thinking about how our faith community, our faith perspective informs the research we're doing and informs how we solve problems,” President Linda A. Livingstone, Ph.D., said in December after Baylor joined the R1 ranks.

That’s the type of vision that drew Romo and other colleagues to bring their research to Baylor. After more than two decades on the faculty at Texas A & M University, Romo was drawn away by the chance to work with top-flight organic chemistry colleagues, work in excellent facilities, and join with faculty across campus to advance aspirations to become a preeminent Christian research university.

Plans for research growth were in the works when he came to Baylor in 2015. Those plans coalesced within the strategic vision of Illuminate, which provided a roadmap that guided Baylor through meaningful steps toward that goal over the last three years. R1 attainment provides an external validation of Baylor’s approach. Faculty members across campus have long demonstrated excellence in their fields, motivated to excellence in a place that operates at a high level amongst a community of high-achieving scholars who share a Christian worldview.

A PLAYGROUND TO EXPLORE

For Romo, that very Christian worldview propels his pursuit of discovery that could impact human disease.

“I think God has given us the ability to reason, to use our minds and, in some cases, synthesize interesting molecules based on natural products isolated from a variety of organisms like sponges or bacteria,” Romo says. “God has given us a playground to explore, for us as scientists and students to seek the rich information within creation that can be used to treat and heal.”

That pursuit of answers in the natural world is at once faith-driven while conforming to the elite standards held by the best researchers—standards that are agnostic in terms of religion, but revered throughout higher education

“I think it’s really neat that Baylor is a research university that also is Christian. When I think back to some of the great giants in science—Louis Pasteur, George Washington Carver, Johannes Kepler, Lord Kelvin—they were not only Christians but they claimed that being a Christian helped and inspired them to be better scientists. I’m excited to think that we’re trying to make our own mark in the world of science, and the idea of reaching R1 status to let the world know that we are Christians and we can also do great science is important.”

Attainment of R1 recognition places Baylor in an elite group of the top 146 research universities, only 37 of which are private. Baylor’s Christian mission is distinct. The credibility afforded by this achievement will elevate top Christian scholars throughout the university, just as their research helped elevate Baylor to R1.

“Getting to R1 means that we have the same footing as other top research universities,” Romo says. “People can recognize that Baylor is doing good research, getting top grad students and doing the things that are required to get to R1 that also lead to new knowledge and understanding. That happens at a Christian university just as it does at a secular university and it’s exciting to see that we’ll have a place at the table in addressing the world’s challenges in pursuit of truth.”
Are you looking for more News?
All NewsArchives