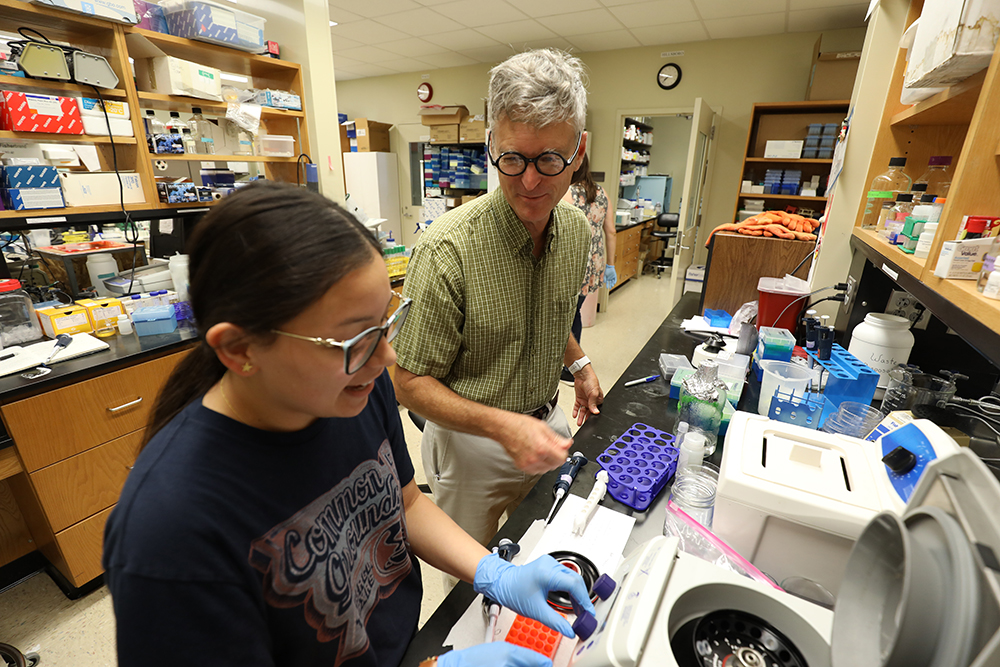 Click here to for a video look into Dr. Kearney's probiotic research.

On battlefields around the world, contagious diseases are a second enemy the U.S. Military is forced to fight, a public health challenge that adversely impacts military readiness. Among them, the military has identified traveler’s diarrhea as its No. 1 contagious disease challenge. Highly contagious, it spreads rapidly throughout teams, resulting in an average of six days of lost duty per infected soldier. It is also unfortunately common—nearly 76 percent of soldiers in Operations Iraqi Freedom and Enduring Freedom experienced traveler’s diarrhea.

“Traveler’s diarrhea is a logistical nightmare,” Kearney says. “Given how rapidly it spreads, systems need to be in place to isolate individuals. Our soldiers are often separated from high-level medical facilities. That’s why technology is needed to actively prevent traveler’s diarrhea, and that’s what we’re developing.”

Kearney and his lab group are creating a prophylactic to extinguish traveler’s diarrhea—a probiotic engineered to attack the bacteria that causes it, while ignoring healthy bacteria. Scalable, long-lasting, and inexpensive, Kearney says the probiotic being developed could be consumed as a daily ration to stop traveler’s diarrhea before it starts.

Peptides, which are naturally-occurring small proteins, are the tools Kearney applies to accomplish this end goal.

“I believe the solution lies with peptide drugs,” Kearney says. “Traditionally, the problem with peptides has been in the delivery of them, since the gastrointestinal tract is made to digest peptides However, by using probiotics native to this region for delivery, we are able to deliver strongly effective doses. Furthermore, we have developed peptides which specifically kill bacterial pathogens while leaving the rest of the microbiota mostly intact.”

This provides a natural extension of Kearney’s scholarship and research. His Baylor laboratory focuses on the development of peptides that kill insects and pathogens without killing off-targets. Much of his research focuses on challenges in the Third-World, where low-cost, natural solutions to disease and insects promote health and human flourishing and can make a meaningful impact on people’s lives. Kearney’s longstanding peptide research provides a natural launch point. The Kearney Lab has already prototyped probiotic delivery of guided antimicrobial peptides using Helicobacter pylori, the stomach bacterium which is the main cause of gastric cancer, which claims 700,000 lives each year. The Cancer Prevention and Research Institute of Texas is a believer in this technology and has awarded Kearney a $248,000 grant to support this research. From this successful prototype Kearney is now also “targeting” diarrheal bacteria.


Other approaches to traveler’s diarrhea have proven insufficient, Kearney says, due to a variety of challenges. Antibiotics can be used to treat it, but at that point, traveler’s diarrhea has already adversely impacted the soldier and spread through a community. Likewise, they are sub-optimal as a prophylactic by killing healthy bacteria the gut needs, and eventually building natural antibiotic resistance. Vaccines also fall short. Multiple species of bacteria cause traveler’s diarrhea, resulting in significant expenses and time to develop a vaccine capable of reaching a buckshot variety of bacteria.

A focused agent is required for traveler’s diarrhea. Guide peptides are those agents, working in concert with other antibacterial peptides.

“It’s funny, because the concept of a guide peptide is borrowed from the military term ‘guided missile.’ So, it guides the payload, so to speak—the antimicrobial peptide—to hit its intended target.”

“It’s surprisingly easy to develop this technology,” Kearney says. “Once we have sequences of DNA that bind the peptides to the virulence factor, you can take that DNA, and put it in a vector for delivery. In this case, that vector is a probiotic.”

Commonly seen in supermarkets and health stores, probiotics have been used by humans for 8,000 years in cheese, yogurt and other products. Most people are familiar with them, and they can fit easily into a person’s diet, health regimen—or, in the case of the military, their daily rations.

“It’s Lactococcus lactis, the most common probiotic in the dairy industry,” Kearney says. “They have a long shelf life, they’re inexpensive, scalable and are ideal for long-term usage. It’s a big advantage—a modular technology, using standard DNA techniques with a fascinating biology that allows us to mold something genetically to target disease.”

A daily bite or a swallow of the probiotic product could be all that is needed to prevent traveler’s diarrhea.

FROM LAB TO MARKET

“My family has a long military history. My dad fought in World War II and my mother had to live under the Nazi regime. That’s actually how they met. So, I’ve always been appreciative of the military, but the concept that I could actually do anything in service of it came as a surprise,” Kearney says.

Baylor’s Lab to Market Collaborative has been a bridge to take his research into new areas, like the Department of Defense, and provide insights into a partnership that could benefit millions around the globe. Lab to Market, Baylor’s technology commercialization approach, is joint effort between Baylor and local venture capital firm Waco Ventures to advance technologies from the idea phase into the marketplace, where they can have real world impact.

Todd Buchs, assistant vice provost for research, technology commercialization and industry engagement and a retired Army colonel, recognized Kearney’s research as a prospect for meaningful use both in the DoD and beyond. Lab to Market has provided development insight and supports efforts for early-stage funding to eventually scale the product.

“From a commercialization point of view, we’re looking at a dual-use technology,” Buchs says. “We’ve been able to have funding for Chris Kearney’s technology development, and we’re looking at future investment into that. It’s something that can be commercialized in both the civilian sector and military sector, which provides the best of both worlds—having a low unit price for a product and seeing early investment come from outside the DoD into the technology.”

That partnership could eventually yield a product that benefits millions—both soldiers and the people they serve.

“The Department of Defense is naturally going to places all around the world, especially in the tropics. That means that technology developed for national defense could be commercialized in the United States, used by our soldiers, but could also be used to help people in the Third-World, many of whom are the poorest of the poor. It’s a great missional fit for us at Baylor—to serve the men and women who serve this country while creating something that can benefit our neighbors by addressing the key health challenges they face.”
Are you looking for more News?
All NewsArchives