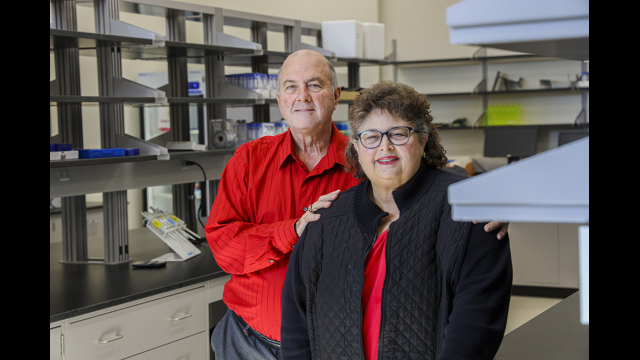 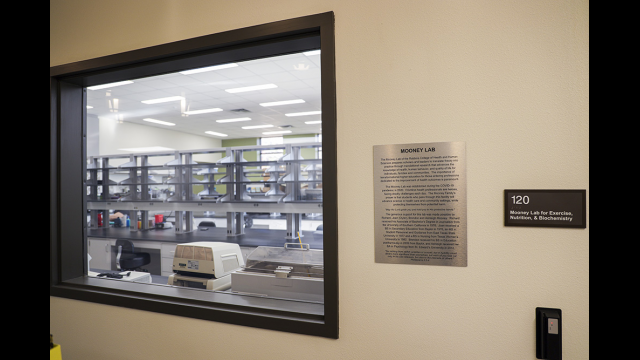 A new Baylor laboratory will house high-level research, backed by a family who found a meaningful way to honor the memory of their son.

The Mooney Lab for Exercise, Nutrition, and Biochemistry is a “next level improvement” for Baylor’s Robbins College of Health and Human Sciences and a gift that has the potential to save lives. Inside Baylor’s Marrs McLean Gymnasium, faculty and students can now utilize 4100 square feet of lab space to conduct research that addresses cancer, kidney disease, heart disease, diet and more.

“We’re so grateful,” Rodney Bowden, Ph.D., Dean of Baylor’s Robbins College of Health and Human Sciences, said. “Generations of future students and faculty will benefit from this as they seek solutions to significant health challenges.”

Richard (ABC) and Joan Mooney, BSEd ’76, laughingly acknowledge their son might be amused to see his name on a facility that will help his alma mater’s efforts to develop a Tier 1 research enterprise.

Brendon Mooney was a young man with an enthusiasm for college life—and like many students he sometimes prioritized the social aspects of Baylor student life as much as the academic. That caveat aside, they say, he loved being an exercise physiology major. His athletic bent and thirst for competition made the field of a study a natural fit. He loved his professors, and discovered, in an informal setting, that he liked teaching others.

“His Beta Sigma Phi brothers told us that he was always in the gym,” Richard remembers. “He wrestled in high school and was really passionate about health and fitness. They said people would actually come up to him for advice on things they were doing to be healthy. Brendon had endeavored to go back and be his wrestling coach’s assistant after high school.”

At the age of 22, Brendon’s life was claimed in a car crash. He was just a year away from graduation, and his death shook the Baylor community. Amidst profound grief, Richard and Joan, along with their daughter, Ashleigh, found support in the Baylor Family far beyond what they expected. Three months after Brendon’s death, the Mooneys accepted the invitation to walk the stage at Summer Commencement and personally receive Brendon’s degree, awarded posthumously by the University.

“They’ve continued to support us through the years and really made his life significant,” Richard said, “It all made us want to give back, to keep his name alive and provide for students.”

When HHPR became a part of the newly-formed Robbins College in 2014, it would prove to open another avenue for that support. The Mooney Lab for Exercise, Nutrition, and Biochemistry is the fruit of their generosity. While that support was spurred by Brendon’s time on campus, the lab’s name honors the whole family—Richard, Joan, and their daughter, Ashleigh.

“We could see Robbins College’s multidisciplinary approach coming together to change lives physically, nutritionally, socially and economically,” Joan said. “Evidence-based research is so important, and we see it coming to fruition in this lab. This proved to be a great fit.”

Since its formation, Robbins College has grown steadily through new courses and degree programs, and engaged in research projects of increasing size and scope. To help facilitate that research, new lab space ascended as a major priority in recent years.

“Lack of space was something we needed to address,” Bowden said, “and the Mooney Lab is a game-changer for us. It’s the kind of space that will help us attract high-profile faculty and give our researchers a collaborative space in which to work. It also

Michael Wiggs, Ph.D., assistant professor in HHPR, joined the Baylor faculty in 2020. The Mooney Lab was not yet complete, but its promise was an important selling point as he considered where to take the next step in his career and build further upon his National Institutes of Health-funded research program.

“You could see in the promise of the Mooney Lab the university’s commitment to building a research presence, becoming more prominent in the research they’re promoting,” Wiggs said. “It’s really a commitment to provide an environment and a space to conduct major and basic science research, and it played a prominent role in being able to come here.”

Jeff Forsse, Ph.D. ’18, clinical associate professor in HHPR and director of research labs will share the space with Wiggs, his new HHPR colleague, to advance his research on renal function and kidney disease.

Forsse is engaged in studies analyzing early signs of renal decline. His research team studies the impact of earlier detection, and whether interventions could prevent kidney disease from progressing, or regain kidney functions before they advance to more serious stages.

Wiggs focuses on changes in muscle size—specifically, a malady called cancer cachexia. Cachexia is a wasting of the muscles associated with cancer and other diseases, and an estimated 20 percent of all cancer deaths are specifically caused by a loss in muscle mass. With the support of a National Institutes of Health (NIH) grant, Wiggs studies the role of mitochondria, the organelles that generate energy within human cells, in that decline.

“Three years ago, we published a paper highlighting the effects of mitochondria as having a causative role in muscle wasting,” Wiggs said. “The NIH grant allows us to look at ways in which we can improve mitochondrial health utilizing different drug treatments.”

“I’m very excited to see this collaborative culture built in Robbins College, and specifically in regard to this lab space,” Sheri Dragoo, Ph.D., chair of human sciences and design, said. “There are so many pieces of research that crossover between our departments, and this provides an environment where idea generation will be a bonus of being in a shared space together.”

As Baylor pursues the vision of Illuminate and advances toward the goal of Tier 1 research recognition, facilities like the Mooney Lab will play an important role in that growth.

“In so many ways, this lab takes us to the next level for our R1 efforts,” Bowden said. “It’s a state-of-the-art space to conduct collaborative, funded research and it will benefit generations of future students as they seek solutions to significant health challenges here at Baylor.

“We are incredibly grateful for the Mooneys and thankful for a chance to remember their son Brendon.”
Are you looking for more News?
All NewsArchives