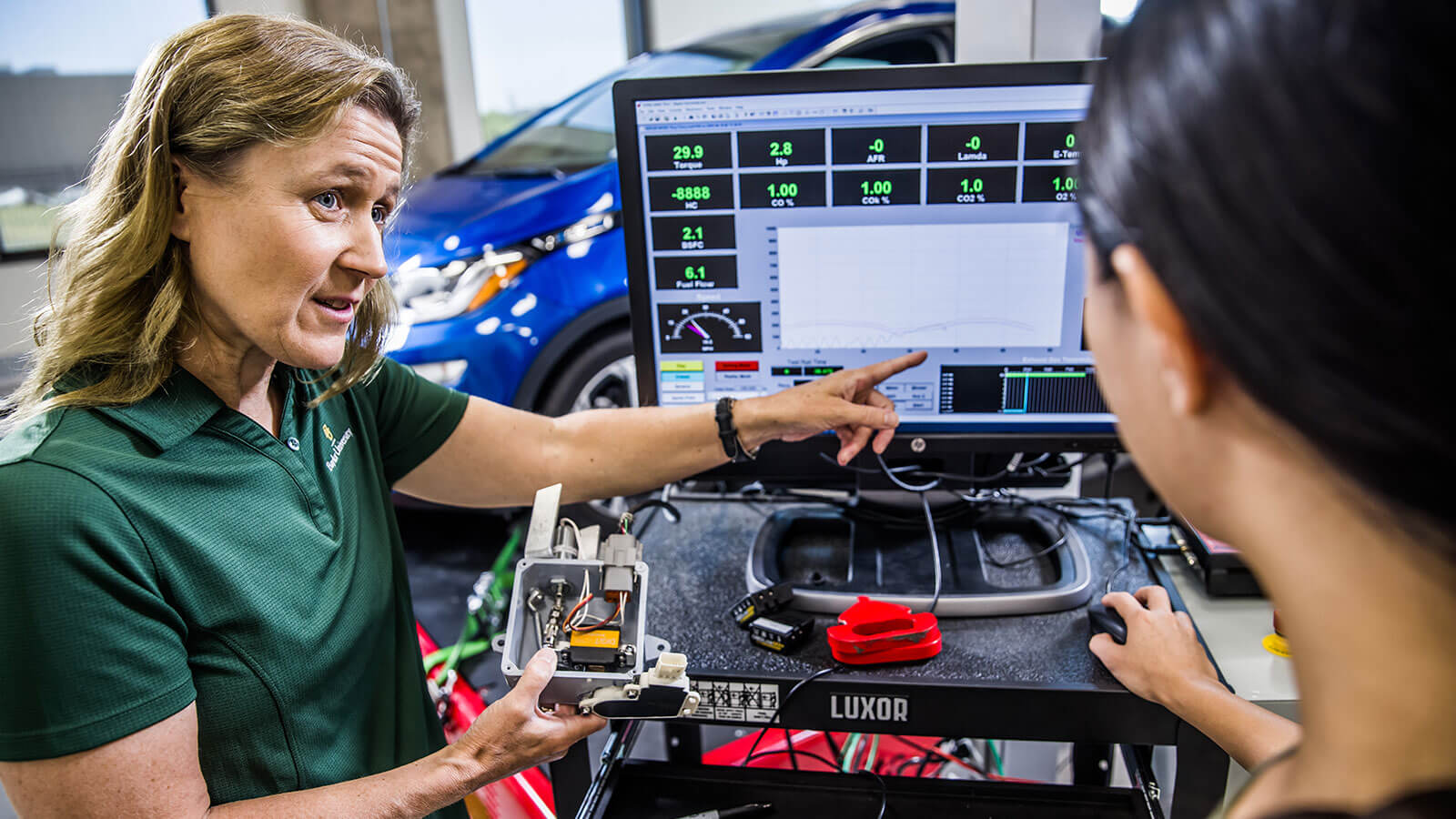 When Annette von Jouanne, Ph.D., accepted a position as a professor of electrical and computer engineering at Baylor in 2017, the University’s vision to be a preeminent Christian research institution was enough to compel a significant move. After 22 years at Oregon State University—where she established a reputation as a renewable energy leader and was named a “Celebrated Woman Engineer” by the National Academy of Engineering—she and her husband made the decision to become a part of Baylor’s research future.

For both von Jouanne and her husband, Alex Yokochi, Ph.D., professor of mechanical engineering in Baylor’s School of Engineering and Computer Science, the chance to contribute to the University’s pursuit of R1/Tier 1 research status as a preeminent Christian research university made for a perfect match.

“We know that our work is part of our relationship with the Lord, realizing God has given us gifts to develop to serve others,” von Jouanne said. “Engineering is a very service-oriented field. In general, an engineer is asking, ‘How can we use science and technology to benefit society?’ As a Christian engineer we ask, ‘How can we use science and technology for man’s good and God’s glory?’”

With a primary focus on renewable and sustainable energy systems, von Jouanne is a leading expert in the field and her contributions have garnered international recognition. Her research is aimed at the utilization of renewables, the discovery of efficient ways to integrate renewables into the power grid and the development of sustainable transportation technologies.

For von Jouanne, a walk along a seashore or a simple windy day can direct her thinking to the energy sources that surround us on a daily basis.

In 1999, von Jouanne helped develop the Ford Escape, the first hybrid electric sport utility vehicle, an experience that launched a specific focus on sustainable transportation. During her time at Oregon State, she initiated Northwest National Marine Renewable Energy Center and developed it into an internationally recognized multidisciplinary program to study wave energy. She also co-directed the Wallace Energy Systems & Renewable Facility, recognized as one of the highest power university-based energy systems labs in the nation. Since those beginnings, she has worked extensively with the automobile industry and the United States Navy on projects related to electric and hybrid vehicles and ships.

Her work with power systems includes the generation of electric power, along with the transmission, distribution and utilization of that power. While working to develop maximum efficiency within every step of that system, she maintains care to balance advancement in technologies that do not sacrifice performance or longevity.

That attention to detail and comprehensive approach has led to several unique opportunities, including contributing to the development of three all-electric ships through her partnership with the Navy.

“On an all-electric ship, we generate about 80 megawatts and then distribute that electricity throughout the ship. We can divert that power to whatever the needs are, including a very efficient propulsion system with electric motors and electric drives.

“We always need to think holistically – ensuring that the advancement in technologies does not cause damage to the overall system,” von Jouanne said. "Thus, our Navy test beds include motors being driven by silicon carbide (SiC) drives under representative conditions—such as loading, temperature and speed conditions—where we have specially modified the motors so we can measure the associated bearing currents. From this research we are designing SiC inverter duty bearings that will enable higher power density applications while ensuring the optimal performance of the overall motor and drive system.”

A High-Power Lab for High-Performance Vehicles

A visitor to von Jouanne’s laboratory within the Baylor Research and Innovation Collaborative (BRIC) would quickly notice test beds, often supporting large vehicles. The test beds facilitate research by mimicking a variety of conditions that impact vehicles and the power they use.

An electric vehicle dynamometer test bed provides a resource to conduct high-level testing aimed at identifying solutions in the transition to electric and autonomous vehicles. Through the testing, she hopes to promote greater understanding of these modes of transportation, and acceptance among people initially resistant to change.

A Positive Impact on our Energy Future

For von Jouanne, the focus on sustainable and renewable energy sources and systems goes beyond simply reducing emissions or maximizing the fuel economy on your daily commute.

“1 Corinthians 10:31 says that whatever we do, we want to do it for the glory of God,” von Jouanne says. “Through research on renewables and sustainable energy and transportation, we are seeking to have a positive impact on our energy future, meeting our current needs without compromising the needs of future generations."

The joy of answering questions that have never been asked before comes with the territory of being a top-tier scientist and researcher. For von Jouanne, these “new frontiers” may range from fast charging technologies to ways autonomous vehicles can empower aging adults to remain independent. But no matter where her research leads, von Jouanne is energized to work with students in an environment that blends excellence in discovery with a sense of mission.

“As a preeminent Christian research university, we have an even greater opportunity to impact the world for Christ, not only through excellent undergraduate education, but also excellent graduate education and research,” von Jouanne said. “Excellent research simply demonstrates God's greatness. And doing research at a Christian research university is the perfect match.”
Are you looking for more News?
All NewsArchives