Baylor>Research>About>News>Construction Engineering at the Molecular Level

Construction Engineering at the Molecular Level 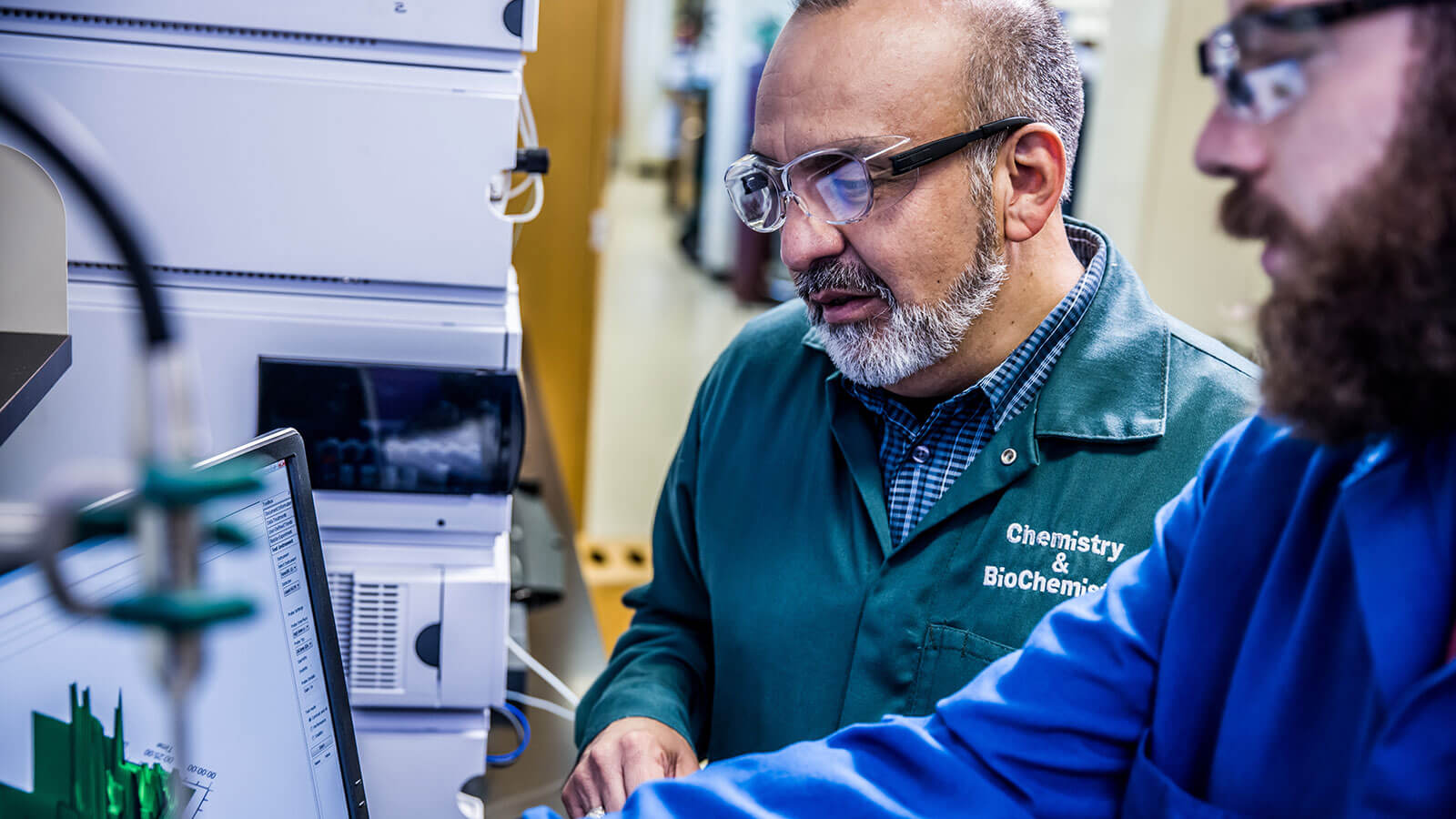 The therapeutics that treat disease—drugs for cancer, Alzheimer’s, viral infections and more—travel a long road before becoming available to the public. If an iceberg represents the entire journey of a drug lead from conception to public availability, Daniel Romo, Ph.D,. says his group’s role occurs at the “tip of the iceberg.” The impact, however, can be far-reaching.

Romo and his students do the work that can provide very early drug leads to pharmaceutical companies. A synthetic chemist and recognized leader in the synthesis of naturally occurring small molecules, Romo came to Baylor in 2015 to continue groundbreaking work he describes as “construction engineering at the molecular level.”

“My research group is interested in the synthesis of natural products, organic molecules isolated from natural sources like marine sponges and bacteria, that have important biological effects,” Romo, the Schotts Professor of Chemistry and Co-Director of the CPRIT Synthesis and Drug-Lead Discovery Laboratory, says. “We’re not in the business of developing drugs, but we’re really interested in coming up with possible drug leads as embarkation points for drug development. We design and synthesize small molecules, building on information harvested from natural products, to provide new insights on how scientists can perturb the cellular functions that might have gone awry in a particular disease.

“Our focus is on making organic molecules that we feel have importance to be used as tools to understand something more about cellular function, thereby impacting human medicine.”

Cancer cells need certain proteins to survive, so Romo and his students study molecules that specifically block the production of proteins that are essential to cancer cells. That’s one area of research within the Romo group—the design and synthesis of natural product-inspired molecules to halt protein synthesis—ideally selectively.

“If you can block the production or action of a particular protein that is crucial for the life of a cancer cell, that typically leads to cancer cell death,” Romo says. “That’s basically what we’re trying to do—starve the cancer cells from proteins they need to survive.”

Isolation chemists extract the molecules from their natural sources; once isolated, synthetic chemists like those in the Romo group can begin their research. Romo identifies molecules with interesting biological activity and structure that can impact disease. He and his students develop plans for synthesizing these molecules in the laboratory.

Romo empowers his students to develop the plans to make new molecules, calling himself initially a coach and, as they grow, into more of cheerleader for their research efforts. On a daily basis, his students are constantly running reactions based on their ‘molecular-scale blueprint.’ Like any plans, they sometimes have to go back to the drawing board, but learn more with each successive set of plans to eventually reach their target molecules. Though it all, they’re searching for very concise ways to assemble these compounds, which can then be studied through further collaborative efforts.

“That’s what these small molecules are leading us to,” Romo says. “They help us identify novel proteins that might be essential for cancer cells and, beyond that, they themselves can become drug leads.”

When a small molecule with intriguing potential is developed within the lab, many new questions arise. How efficiently can the compounds be made? Is the synthesis scalable to readily develop for testing? The long lead time and research costs for drug development have placed a greater demand within the field for efficiency. Accordingly, Romo has helped pioneer a new synthesis strategy that could greatly reduce the time it takes for a molecule to move from natural product to a compound with development potential.

As synthetic chemists uncover interesting biological activity within a natural product—activity with the potential to fight disease—a detailed understanding of exactly what parts of that molecule give rise to this activity can accelerate the process. Sometimes it comes from the whole molecule, but often, the meaningful action comes from a small fragment. A new synthesis strategy developed in the Romo group approaches that challenge from a different angle.

Coined “Pharmacophore-directed retrosynthesis” (PDR), this approach can be explained by furthering the construction engineering analogy.

“It’s like the difference between constructing an eight-story building when all you may need is a six or seven-story building,” Romo says. “A pharmacophore is the minimal structure required for the activity of a bioactive molecule and identifying that early can really speed up the potential of identifying a drug lead.”

In applying the strategy to a planned synthesis, researchers devise a hypothesis as to what part of the molecule is most important to potentially fight disease. They then synthesize that part of the molecule first and make derivatives earlier in the process, en route to synthesizing the complete target “by stopping and seeing what is on the fifth, sixth or seventh floor before going all the way to the top.”

With the potential to greatly reduce the time to identify useful compounds that could lead to drug development for neurodegenerative diseases, PDR has received meaningful attention within the field and was featured in the journal Nature Chemistry. Studies were funded by the National Institutes of Health (NIH).

“In applying this new synthetic strategy, ideally, we will find simplified versions of the natural product that retain much of the bioactivity,” Romo says. “We can start testing the biological activity of these fragments at a much earlier stage in our synthetic efforts.”

A Playground to Explore

After more than two decades on the faculty at Texas A & M University, Romo came to Baylor drawn by organic colleagues, excellent facilities, and the draw of Baylor’s aspirations to become a preeminent Christian University.

Plans for research growth were in the works when he came to Baylor in 2015, and those plans coalesced within the strategic vision of Illuminate, which provides a roadmap for the University to pursue Tier 1/R1 research status.

“I think God has given us the ability to reason, to use our minds and, in some cases, create interesting molecules,” Romo says. “God has given us a playground to explore, for us as scientists and students to seek the rich information within creation that can be used to treat and heal.

“I think it’s really neat that Baylor has a mission to become a preeminent research university that also happens to be Christian. When I think back to some of the great giants in science—Louis Pasteur, George Washington Carver, Johannes Kepler, Lord Kelvin—they were not only Christians but they claimed that being a Christian helped and inspired them to be better scientists. I’m excited to think that we’re trying to make our own mark in the world of science, and the idea of reaching R1 status to let the world know that we are Christians and we can also do great science is important.”
Are you looking for more News?
All NewsArchives