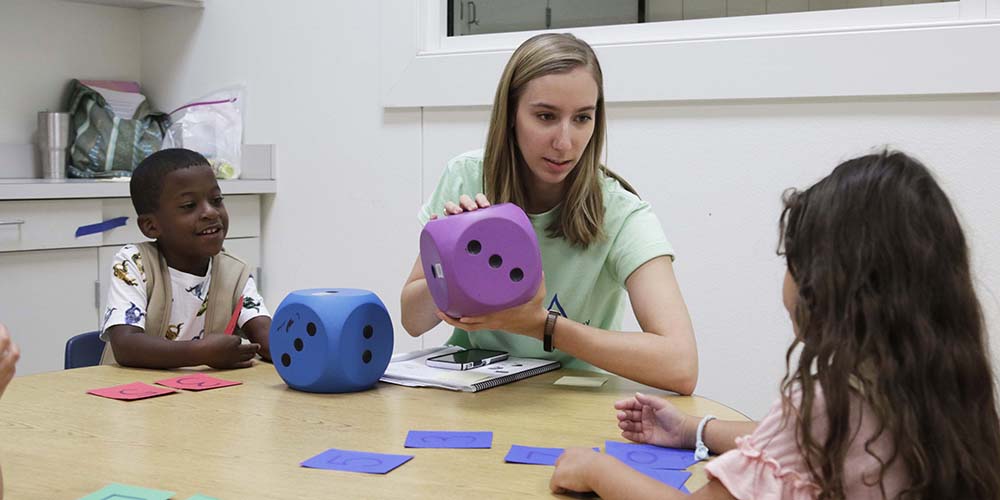 This story originally appeared in the Baylor School of Education’s Impact magazine. Click here for the full story.

Through the Math for Early Learners Academy (MELA), a Baylor summer program for pre-K through second graders, Sandi Cooper, Ph.D. professor of mathematics education, has been trying to address that deficit since 2016.

Cooper said that providing math intervention at an early age is critical.

"Despite the fact that many people think mathematics is not important in early grades, research actually suggests that early math skills are a better predictor of academic success than early reading skills," Cooper said. "We want to provide a firm foundation for the children in math learning that we hope will carry them through middle school and prepare them to select advanced math classes in high school. And with this, they can then pursue any career that they are interested in."

In four summers, the MELA program has enrolled more than 140 students from Waco ISD and LaVega ISD schools. During the fourth year (2019), the program served almost as many children as it did in its first three years combined. And while that number of students may fall short of global impact, SOE researchers are learning lessons that they will use to multiply the effects.

A key component for broadening the program's impact is developing a curriculum and aligned assessment, and Baylor faculty and graduate students are seeking funding to do that. A standard curriculum for the program will allow any school district, nonprofit group, or university to host an intervention program in early math in any location around the nation, although they do plan to develop materials that align with Texas education standards.

Brandy Crowley, a doctoral student in the Department of Curriculum & Instruction and director for the program, said an additional goal is to develop a bilingual version of the curriculum and assessment that school districts can use during summer school. A summer-intervention curriculum does not exist," she said. "There are kits that big education publishers sell, but there is no research behind them."

MELA researchers, on the other hand, have collected convincing data that their approach is working. The research team began by collecting pre- and post-program data on MELA students, at the beginning and end of the four-week program. That data showed improvements during the summer intervention, but did those improvements last? To find out, Cooper's team followed MELA participants into the school year.

The students enrolled in MELA had already been chosen based on a math deficit shown through in-school testing — assessments that provided comparison to their peers. When Cooper's team tested the students during the school year, they found that MELA students' summer improvements held fast.

"In the fall and in the spring, we tested MELA students and a group of their peers from the same school, for comparison," Cooper said. Researchers found that students who were behind and then attended MELA had caught up with their peers — and they stayed caught up. While it's impossible to keep up with every MELA student as the program grows, researchers have tested a statistically representative group of MELA participants and non-participants.

Due to COVID-19 precautions, the team was not able to host MELA 2020, but an expert team, leading the development of a curriculum and aligned assessment, continues their work to be prepared for future programs. This team includes three of the MELA Master Teachers, two former teacher education students who taught in MELA, three Baylor graduate student researchers, an early childhood expert, a school district math supervisor, a school district administrator, and an expert in assessment development. In addition, Dr. Doug Clements, a national leader in early childhood mathematics research, serves as advisory to the project. The goal is to develop a prototype curriculum and assessment that can be tested in future summers to determine the reliability of the instructional value and to further refine the documents.
Are you looking for more News?
All NewsArchives