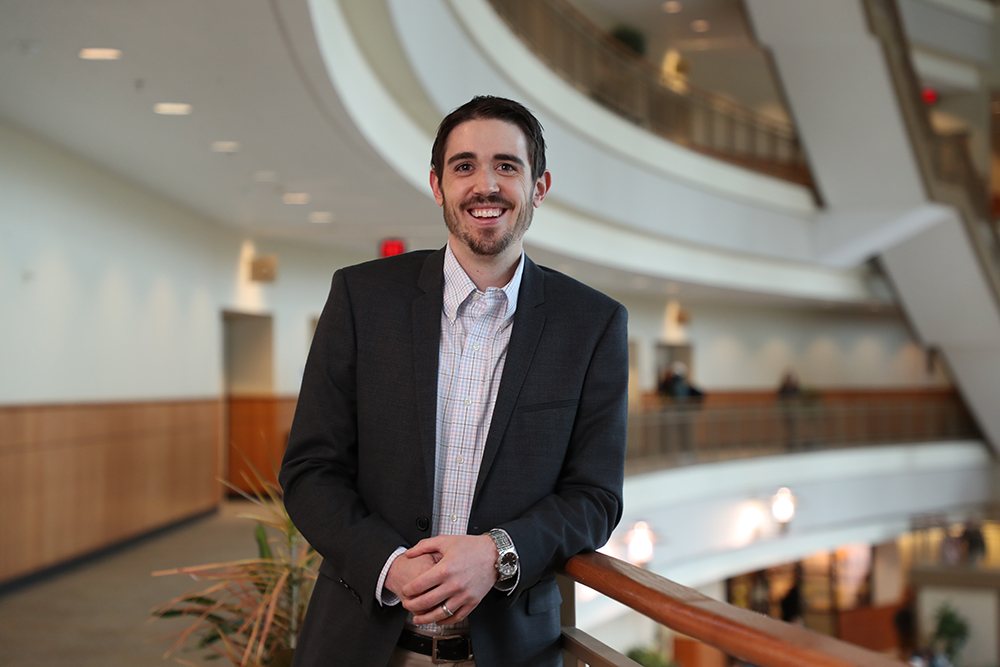 The CAREER award from the National Science Foundation is the most prestigious honor the organization presents to young researchers, providing significant funding to advance the recipient’s research and educational objectives. These highly-competitive awards are presented to a select group of scholars who, as the NSF explains, “have the potential to serve as academic role models in research and education and to lead advances in the mission of their department or organization.” This spring, Baylor University faculty earned a school record four NSF CAREER awards. Meet one such researcher below or click here to learn about other 2020 Baylor recipients.

Michael Scullin, Ph.D., assistant professor of psychology and neuroscience, has built a reputation as one of the nation’s leading sleep experts. The founder of Baylor’s Sleep Neuroscience and Cognition Lab, Scullin’s wide range of research projects has helped people better understand the impact of sleep on a variety of academic and professional success factors.

This year, he was awarded a National Science Foundation (NSF) CAREER grant to take his research even further—to study the impact of sleep habits on a student’s ability to learn complex STEM materials.

“If I let you sleep eight hours and told you the next morning that you’re going to hear an organic chemistry lecture and take a test, you might say, ‘I think it’s going to be really hard, but I’ll probably get a 70,’” Scullin said. “Conversely if I only let you sleep for, say, five hours and did the same thing, now you’re thinking you may perform at 50 percent. You’re selling yourself short. We want to take these concepts into the laboratory and see whether mild cutbacks on sleep have that same impact on that fear of difficult concepts, stress, and how well they can actually learn and perform.”

It’s a domino effect—sleep, energy, confidence, persistence, performance—that adds up in big ways, both positively and negatively for students. Scullin knows that well. He describes himself in high school as a “bad student” who stayed up late every night playing video games, then would wake up the next morning fatigued and sluggish heading into school: the negative side of the domino effect. That changed in college.

“It seems silly now, but my brain didn’t connect the dots in high school,” Scullin remembers. “I just thought, ‘well, that’s how you feel.’ And if you talk to a lot of students, they’ll give you the same thing. But, what if we could nudge them out of that and get them to sleep better? In college, I learned that lesson. I started getting better sleep and life got better. I went from an ‘eh’ student to realizing I liked school.”

Those steps helped guide Scullin towards the study of sleep. At Baylor, he’s released highly-regarded studies on the impact of sleep on creativity and attention, sleep consistencies and exam grades, memory and recall, and more. The studies supported by his NSF award will take that even further—the impact of sleep on the comprehension and retention of challenging STEM materials.

He used the example of organic chemistry, widely regarded as one of the more difficult classes for a student to take, and that subject will serve as the source for his research. The amount of sleep students receive, how it impacts their grades and how it impacts their attitudes and persistence towards challenging materials will blaze new trails in understanding.

“The classroom-based experiments are to take what we learn in the laboratory and build interventions for improving sleep habits while students are actually taking organic chemistry,” Scullin said. “The idea is to give things like sleep education, provide incentives for sticking to consistent bedtimes and see if students will actually change their sleep behaviors. And then further, if you improve sleep, do you improve academic outcomes? Do they do better on a quiz that week or on cumulative tests later on?”

Further steps in the study will examine achievement gaps based on gender and ethnicity, and the possibilities that better sleep could narrow those gaps.

“It’s exciting stuff that we’ve been building to for years now, and I’m so thrilled that NSF is supporting this for another five years.”

For Scullin, as well as other NSF grant winners, there’s another angle to the award—an educational piece that impacts students and non-students alike, potentially far beyond campus borders.

Scullin’s grant will fund the formation of a permanent sleep exhibit at Baylor University’s Sue and Frank Mayborn Natural Science and Cultural History Museum Complex. The exhibit will contain a modern kiosk with interactive information for both children and adults on how sleep impacts the brain, sleep pledges to encourage visitors to get better sleep and, potentially, an interactive sleep education video game.

“We want to do something with a broader reach that can have a significant impact on our community,” Scullin, who led the formation of a temporary exhibit at the Mayborn Museum in the past, said. “We wouldn’t be able to elevate our museum exhibit without five years of funding.”

In the future, he hopes additional funding could be used to take it nationwide—a traveling sleep science exhibit at museums across the country.

Scullin’s NSF award is a benchmark for research marked by quality, impact and visibility—strategic goals within Illuminate, Baylor’s strategic vision to reach R1 research status. His award comes at a landmark time for the university, who celebrated this year a school-record four CAREER awards in the spring.

Scullin, who joined the Baylor faculty in 2015 and saw Baylor formalize research goals in the years since, says that strategic university-wide focus helps build research momentum like the University is seeing now.

“And then the cascading effect is, when you’re doing this on a formal basis and you're doing this across departments, then the culture begins to shift to one where really excellent grant-getting scientists want to stay here. They see people around them who are seeking out the best journals are seeking out the biggest grants. They're seeing themselves as part of a team, as part of the culture that's pursuing excellence in research, and awards like these demonstrate that.”
Are you looking for more News?
All NewsArchives