Kenny Befus—Reading the Clues in Minerals and Gemstones 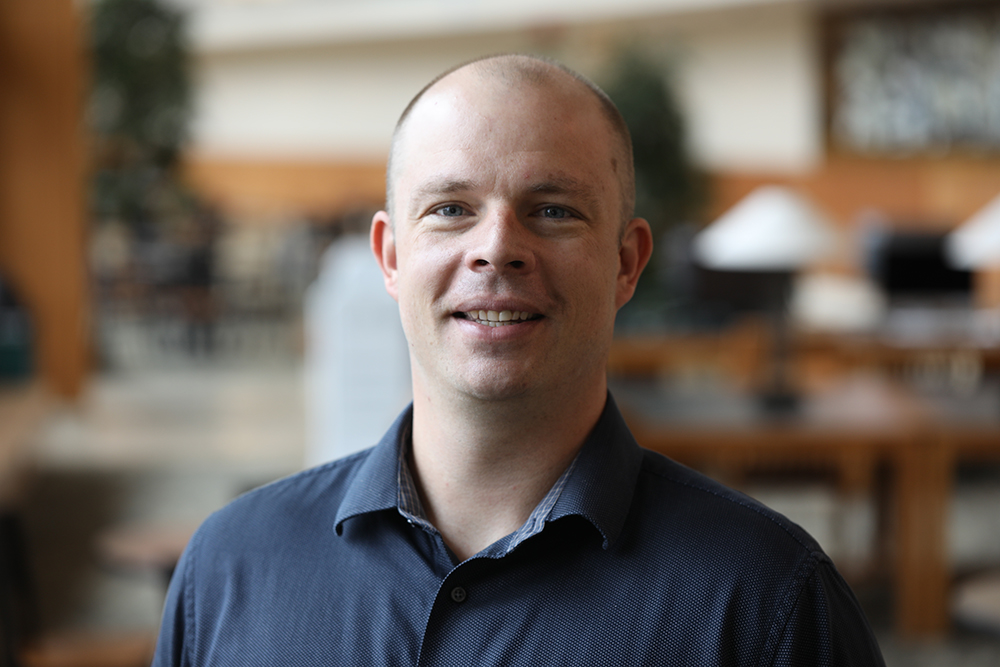 The CAREER award from the National Science Foundation is the most prestigious honor the organization presents to young researchers, providing significant funding to advance the recipient’s research and educational objectives. These highly-competitive awards are presented to a select group of scholars who, as the NSF explains, “have the potential to serve as academic role models in research and education and to lead advances in the mission of their department or organization.” This spring, Baylor University faculty earned a school record four NSF CAREER awards. Meet one such researcher below or click here to learn about other 2020 Baylor recipients.

Since completing his doctorate in 2014, Kenny Befus, Ph.D., assistant professor of geosciences at Baylor has focused his professional research on volcanoes. His work with drone footage of lava flows has been featured by NPR. From his Baylor lab, Befus and his students can make magma to study it up close. During his free time, he has engaged in gemstone hunting and faceting as a hobbyist, becoming a U.S. Faceting Guild-rated Master Faceter, being invited to prestigious gem shows and traveling the world to explore mining tunnels.

Now, Befus has found an innovative way to study gemstones, minerals and volcanoes and their relation to each other.

“Volcanoes capture people’s imaginations, and so do gemstones I’ve found. So, it is an interesting topic to talk to people about. The research will naturally dovetail with a carefully structured education program that relies upon the intrinsic beauty of gemstones to capture the minds and imagination of its audience.”

Traveling all over the world, from Yellowstone to the Amazon rainforest, Befus and his team hope that their sample collections will serve as the beginning of a new way of viewing gems and geoscience and evaluating volcanic activity.

Geological Records in Gems and Minerals

Befus is focused on measuring tectonic and volcanic forces. Subsurface geological forces influence volcanic activity, raise mountains, shift continents and more. Studying these dynamic processes is fundamental to understanding plate tectonics, seismic and volcanic hazards and changes in landscapes. A more comprehensive understanding of these forces would allow for better preparation ahead of hazards and natural disasters.

So, where do minerals and gems fit in?

These major forces cannot be measured directly. However, the dynamic environment they create puts stress on minerals and gems, which have crystalline structures. Befus posits that these crystal strains, if identified and measured, provide quantifiable in-situ records of geological forces. His team is focusing on crystals ejected in volcanic eruptions.

“The biggest new technique is the synchrotron. It’s like a particle accelerator that has been retrofitted to make different types of measurements. I’ll maybe bring 100 crystals the size of a golf ball to this particle accelerator, and then I have 48 hours to use it by myself or with a student. We have to run it, nonstop day and night, because it is so competitive to get that time."

The CAREER grant includes funds for research and education, supporting public engagement as well as post-doctoral positions, graduate students and undergraduate research. Befus hopes that his research will open up career opportunities and interests in the areas of gem, spatial and geoscience research.

“I’m using gemstones as the outward facing vehicle to engage with the public and to engage with students at Baylor. I’m going to develop a new class as a first-year level lab science requirement called Gems and Minerals. I teach them everything about how gems work. They get to facet a gemstone themselves on faceting machines, which is a neat thing, and of course I tie it in to physics, optics, minerology and geology.”

The Gems and Minerals course is aimed at non-major undergraduate students who require a lab science credit as part of their degree plan. Gems will expand student engagement and draw more non-major student into the field of geology. Further attention will be focused on expanding the study of geovisualization with geoscience major undergraduates, graduates and post-doctoral researchers. Baylor’s Geovisualization Lab supports interdisciplinary work of geoscience students through multi-core computers, 3D printing, drones, GPS and software to train and encourage visualization of geoscience projects. Befus aims to add to and encourage more opportunities for use of the lab.

He also hopes to coordinate with the Baylor University’s Sue and Frank Mayborn Natural Science and Cultural History Museum Complex, which has many public engagement opportunities, to establish a lecture series, provide mobile lesson plans and materials for local teachers, design an updated gem and crystal display for the museum floor and more.

Honors like CAREER Grants expand knowledge throughout the scientific community, and further bolster Baylor’s pursuit of a compelling vision—to become an R1 research institution and a preeminent Christian research university.

“At Baylor, the recent increase in the number of CAREER Award winners clearly demonstrates that we are building a strong foundation for future success and sustainability of our research enterprise,” Kevin Chambliss, Ph.D., Vice Provost for Research said. “I’m a firm believer that success breeds success, and I fully expect the success of this year’s CAREER award winners will increase our ability to recruit top talent and further accelerate our research progress.”

As Baylor moves further into Illuminate, the University’s strategic vision, awards like CAREER grants demonstrate this vision in bloom—a culture of dynamic research that enhances Baylor’s impact and provides students with further opportunities for engaged learning—excellence both in and out of the classroom.
Are you looking for more News?
All NewsArchives