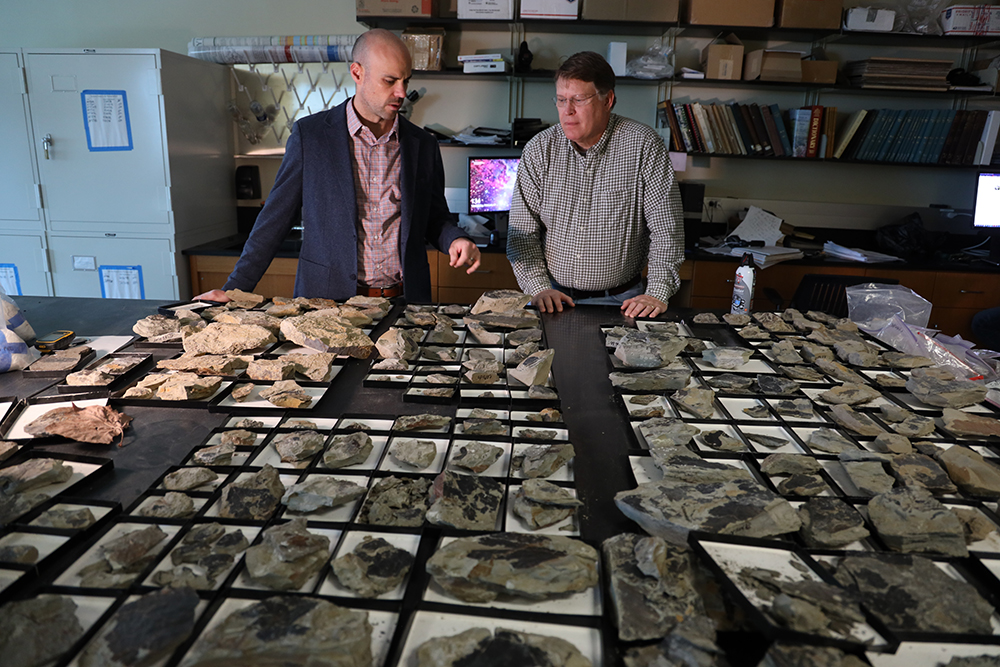 The following article originally ran in the spring 2020 edition of Baylor Magazine.

Lake Victoria, the largest lake on the African continent and the largest tropical lake in the world, has the potential to dry up more quickly than researchers previously realized, and the White Nile tributary (the only outlet for Lake Victoria) could disappear within a decade, according to a study published in Earth and Planetary Science Letters.

The drying up of these bodies of water, which the project’s researchers say is driven by climate change, could be devastating to large swaths of East Africa and millions of people, according to the study, “Rapid Pleistocene desiccation and the future of Africa’s Lake Victoria.”

Two Baylor faculty members — Daniel J. Peppe, Ph.D., associate professor of geosciences, and Joseph D. White, Ph.D., professor of biology in the College of Arts and Sciences — were part of a researcher team led by Emily Beverly, PhD ’15, assistant professor of sedimentary geology at the University of Houston.

The researchers developed a model for Lake Victoria to help understand how changes in rainfall and temperature would affect the future of the lake. They discovered that relatively small changes in climate could cause lake levels to drop rapidly.

“Using future climate projections, our model also predicts that at current rates of temperature change and previous rates of lake level fall, Lake Victoria could have no outlet to the White Nile within 10 years, and Kenya could lose access to the lake in less than 400 years, which would significantly affect the economic resources supplied by Lake Victoria to the East African community,” the researchers wrote.

The colleagues developed a water budget model for Lake Victoria in Kenya that examines how changes in rainfall and temperature cause changes in water levels in the lake.
“Modeling indicates Lake Victoria can transition back and forth between modern lake levels and being completely dried up in centuries to a few millennia,” Peppe said.

The model showed the desiccation and refilling of Lake Victoria can happen over short periods and is directly tied to the mean annual precipitation levels and associated runoff. The research team also was able to use the model to predict the effects of future climate change on Lake Victoria.

Peppe said the disappearance of the White Nile could have broad repercussions, including depriving Uganda of its primary source of electricity via hydropower and the water that sustains the Nile during non-flood stages.

“In addition, every major port city around Lake Victoria could become landlocked in as little as 100 years. In 400 years, Kenya would have no access to the lake while Uganda and Tanzania would gain huge areas of potential farmland setting up a potentially dangerous dynamic between countries that currently fight over the lucrative fishing rights to the lake,” Peppe said.

The researchers wrote that more regional climate modeling is urgently needed to understand the effects of climate change on the area.
Are you looking for more News?
All NewsArchives