Extending the “Golden Hour” for the Critically Injured 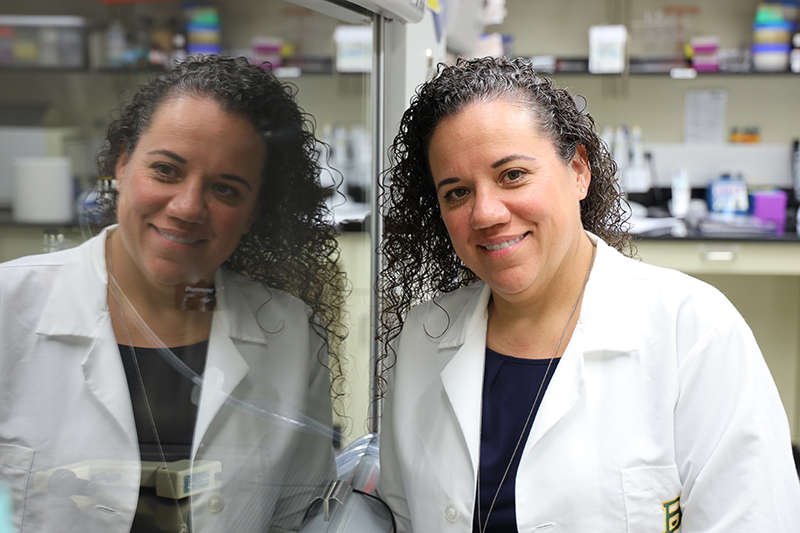 War, and the way it is fought, is changing. Progressions in technology, ballistics, weaponry and even city growth present challenges to keeping injured service men and women alive until further medical care can be reached. In the field, there’s a time, known as the golden hour, that can be the difference between life and death. Previously, if injured individuals could be kept alive and transported to a fixed care facility within the first 60 minutes—the golden hour—their likelihood of survival was greatly increased. However, an hour often isn’t long enough. Erica Bruce, Ph.D., associate professor and graduate program director of environmental science at Baylor, has patented a resuscitative, oxygenating drug aimed at multiplying the golden hour to save lives impacted by traumatic injury.

“We began hearing this term, the golden hour, referring to the time a patient arrived at a fixed facility or traditional echelon of care. If they arrived within an hour, the chances of survival went up dramatically. When we think about combat theaters today and even in the future, combat theater is going to look a lot different,” Bruce said. “So, our goal is to try to create a drug that we can extend the golden hour to something on the order of 72 hours.”

For service members injured in combat, hemorrhage, or bleeding out, is the most common cause of preventable deaths. When an individual experiences severe blood loss, even when the bleeding has been stopped, the body experiences hypoxic conditions as it lacks the necessary number of red blood cells needed to carry oxygen to vital organs. Hypoxia is a condition characterized by a lack of oxygen in the body or a region of the body. Bruce aims to fulfill a critical need in combat casualty care through her research on hypoxic conditions.

Combat medics in the field carry only what fits on their backs—often only a relatively small volume of IV fluid. Bruce’s team, supported by Hemotek, LLC (Plano, Texas), their industrial partner, recently developed and patented an oxygenating drug - Ox66™ - that alleviates hypoxia due to blood loss or hemorrhaging. This therapeutic delivers oxygen throughout the body, can be administered intravenously, is sterile in a light-weight powdered form, and does not have to be blood-typed and cross-matched—meaning a recipient can be any blood type.

“We needed something that can be easily deployed, something that field medics can take out and give immediately in the field, but they're not going to have a large volume of fluid to use. So, they need to get the best bang for the buck with that amount of volume,” Bruce says.

Bruce imitates field conditions in the lab through rodent studies, examining the effectiveness of the therapeutic even with only a small amount of blood available. With as little as 10 percent remaining, Bruce’s team has been successful in extending life, on average, for one to six hours, and as long as eight hours, thanks to the resuscitative drug. In the field, those additional hours make the difference for an injured service member who needs them in the hours between injury and transportation to centers where critical care is available.

The team’s success has led to a $2 million pending proposal with the Department of Defense to extend their work to key parameters and potential problems, like coagulation and inflammation. Looking downstream is important to Bruce; the research isn’t just about survival in the moment, but also quality of life down the road. By keeping oxygen circulating through the body, even in the midst of injury, future brain, heart and overall organ function will benefit.

A Variety of Applications

While this particular research focuses on hypoxic conditions, Bruce’s background in environmental science will further inform the research. Combat members are stressed, possibly dehydrated and fatigued. They are exposed to bacteria and particulates, with drinking water containing different pathogens, and the fabrics of their uniforms often interlaced or coated with pesticides to protect them from disease-carrying pests.

How do those conditions affect the way a body heals, and do they impact the efficacy of the resuscitative drug? Bruce’s next steps hope to address these lingering questions. Soon, Bruce’s research will move from rodent studies to porcine models, whose biological systems bear strong resemblance to humans, in collaboration with the 59th Medical Wing of the Air Force.

The team’s goal is to build a case for testing the resuscitative drug in larger animals. Her lab has multiple projects under their umbrella of hypoxia that look at the ways the drug could be used. Getting the drug across the blood-brain barrier is of significant concern for Bruce’s lab, specifically with regard to traumatic brain injuries and Alzheimer’s disease.

“There are some indications that if you've had a traumatic brain injury in a combat theater, it puts you at a higher risk for Alzheimer's later in life,” said Bruce. “The Department of Defense is very interested in that work because most of the service members who see combat theater action will have a blast-induced traumatic brain injury and receive repeated mild concussions.”

Bruce also sees the benefit of the resuscitative drug in civilian emergency care and medicine, referencing the close-to-home 2013 West Fertilizer Company explosion and other situations where individuals may have multiple injuries or significant blood loss. This oxygenating therapeutic could also have a variety of applications for conditions exacerbated by hypoxia. Chronic wounds, such as diabetic ulcers, often have trouble healing due to hypoxic conditions in the wound.

The resuscitative fluid developed by Bruce and her team could be integral to reducing loss of life due to war casualties in the future. It could also provide those who survive because of the drug a better quality of life after putting their lives on the line in service to their country.