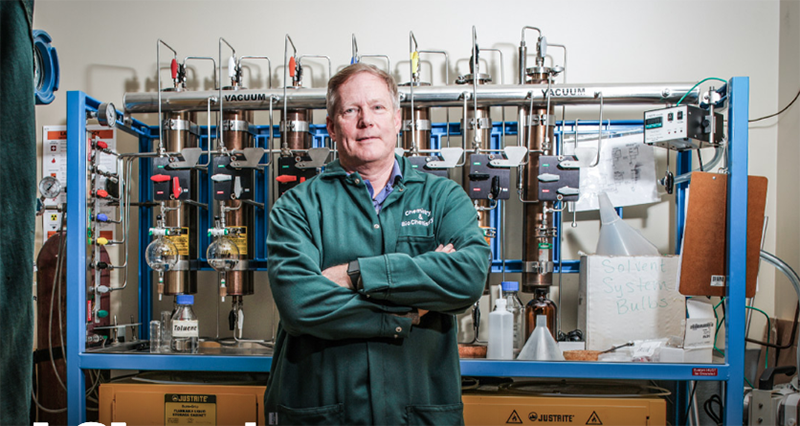 The following story originally appeared in the Winter 2019 edition of Baylor Magazine. Click here for the complete article.

Dr. John L. Wood, the University’s Robert A. Welch Distinguished Professor of Chemistry, averages 60 to 70 hours a week in the east wing of the Baylor Sciences Building (BSB), arriving to his office before the sun rises Monday through Saturday. A world-renowned chemist and cancer researcher, Wood is recognized for his impactful work in an area of chemistry called natural products synthesis or total synthesis, which involves re-creating complex, naturally occurring molecules in a lab setting. These molecules—derived from soil samples, plants or fungi—demonstrate biological activity that could be useful to pharmaceutical companies developing new drug therapies that target cancer.

Wood, who spent 13 years on faculty at Yale University, and six at Colorado State University before coming to Baylor in 2013, readily concedes that he doesn’t necessarily measure success in his lab in strictly chemical outcomes.

“That’s not what I’m here for,” Wood says. “In my lab, every student and post-doctoral researcher is working on synthesizing a different molecule. My job is to engage my students as a consultant, to field questions, but never to tell them what to do or what to research. I’m here to produce people who can do that creative and critical thinking for themselves.”

And produce he does. The John Wood Group has sent researchers from Baylor to such academic institutions as Massachusetts Institute of Technology (MIT) and Harvard University, as well as industry giants AbbVie and Genentech. Wood says such success goes a long way in recruiting top-flight students and faculty to Baylor, and, in turn, allows the University to compete in every way with the nation’s highest-ranked research universities.

Convincing Wood to leave his home state of Colorado for Waco took every bit of two years. Dr. Patrick Farmer, chair of the Baylor Department of Chemistry and Biochemistry, says the original offer included the University’s Welch professorship, endowed by The Welch Foundation of Houston and most recently held by the late Dr. F. Gordon A. Stone. Ultimately, Wood’s commitment was sealed when Baylor was awarded a five-year, $4.2 million grant by the Cancer Prevention and Research Institute of Texas (CPRIT) in late 2012.

“I worked on writing the CPRIT grant for eight to twelve months,” Farmer says. “This type of CPRIT grant—the Recruitment of Established Investigators Award—is designated specifically for recruiting ‘big fish’ to the State of Texas, and these funds are typically awarded to medical schools and research hospitals.”

The award that brought Wood to Baylor has allowed for the assembly of what is easily a dream lab. “The lab facilities at Yale were not as good as those at Colorado State, which were not as good as what we have here at Baylor,” Wood says. “The CPRIT grant was not only key in recruiting me here, it is the key to what I believe will be a lasting impact. Those funds have directly benefitted our cancer research, but there are also tangential benefits as we continue to establish Baylor as a top research university. It’s important that our instrumentation is able to attract graduate students and post-doctoral researchers, and other faculty members—junior faculty as well as established investigators looking at moving their research operation to Baylor.”

One such established investigator is Dr. Daniel Romo, The Schotts Professor of Chemistry and co-director of the CPRIT lab. Recruited in 2015 from Texas A&M University, Romo says the chances of his move to Baylor would have been nil if the state-of-the-art NMR instruments weren’t in place. Like Wood’s research group, the Romo Group focuses on synthesizing compounds derived from nature and understanding their biological effects in cells at the molecular level.

Aside from the instrumentation available, applicants to the graduate program also care about the facilities in terms of the building’s appearance and the work environment, Wood says. And the CPRIT lab is no subterranean bunker. Large, picture windows line the north wall, drenching everything in natural light. The view from the second floor of the BSB allows strained, goggle-protected eyes to rest on some point in the distance or take in a Quidditch match on the playing fields below.

“Baylor does a wonderful job of taking care of this facility,” Wood said. “The maintenance team is regularly shampooing the carpets, waxing the floors, washing the outside of the buildings. These touches make a huge difference. There is someone who goes around and takes care of the plants in the hallways—I don’t do that. Those kinds of details make this a place where people want to work.”
Are you looking for more News?
All NewsArchives