Baylor>Research>About>News>For the Living and the Dead

For the Living and the Dead 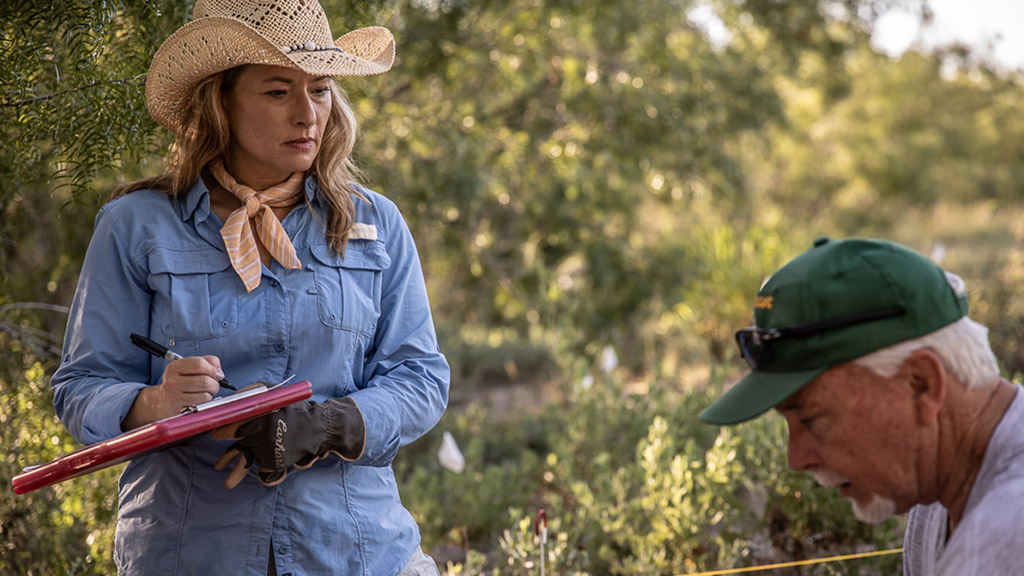 “I’ve known about deaths along the border for most of my life,” said Lori Baker, PhD, professor of anthropology and vice provost for faculty development and diversity. “What I didn’t know was the number of people that were dying and the lack of effort that we put into knowing who these individuals are.”

Baker has changed that. Her work focuses on identifying the remains of undocumented immigrants. It’s challenging, hot and time-consuming work, but Baker and her team feel a deep calling to the lost and to the lessons learned in what they find. “We’re trying to help the families of the missing. We’re trying to bring dignity back to those individuals who’ve been buried and discarded. We’re also using what we learn to inform resources and services for immigrants into the future,” she said.

The genesis of her pursuits goes back to her days a Baylor student. One day, while Baker was working along the border, the sheriff said, “’We have all these people dying and nobody wants them. You could just have them.’ That’s the first time I realized that people were dying, and we were doing absolutely nothing to identify these individuals.” That stayed with her forever.

In 2003, she founded Reuniting Families, an international consortium for forensic identification made up of Baker, Baylor colleagues and students and other forensic scientists who recover the remains of migrants who do not survive their journey along the border.

Baker travels to work in the harsh shrublands along the Texas-Mexico border once every couple of months. In this backcountry, many migrants succumb to the extreme heat and harsh conditions, exacerbated by lack of familiarity with the region. The individuals who experience these tragic outcomes are who Baker seeks to find.

“We’re trying to work to identify individuals that are somewhat invisible in life. There may not be medical records that you can go to,” said Baker of immigrants who, if found, don’t want to be identified and often don’t carry documentation.

The solemn task is made more grueling by triple-digit heat and the extreme care required to ensure the preservation of remains found and the dignity of the individuals they repatriate. For Baker and her team, the challenges come second to the primary goal of locating and identifying the remains so they can inform families. For the families they contact, the news is heartbreaking, but the sense of closure provided allows them to enter a new stage of processing their grief.

As migration patterns have changed over the years, Baker’s work has experienced change and expansion.

“We’ve been starting to work more on the root of the problem and other ways our work can help address the changes we’re seeing. We’ve dealt with the symptoms for a long while,” said Baker of the large number of people who leave their home country due to safety or financial concerns.

In the 1980s the largest group crossing the border was men ranging from 17- to 35-years-old. Slowly the pattern changed to include more women and children. From 2012 to 2014, Baker said, the number of unaccompanied children doubled.

“My greatest concern before we had the crisis in 2014 was that we didn’t have the infrastructure to deal with all these children that were crossing, and then the fact that 80% of them were crossing unaccompanied. My concern about human trafficking grew,” she said.

As a result, Baker recently started working with the federal government to launch a pilot DNA program for the living to ensure those crossing the border together were, in fact, related. The child separation policy was another cause for concern. “If you’re going to reunite children and the adults they cross with, you should make sure they’re related,” Baker said.

“Our supposition was that there are children that these adult males are attaching themselves to and claiming them as a family unit so that they can have a greater chance of staying in the U.S. Then concerns grew about the exploitation of these children – what will happen to them if they’re reunited with someone considered to be their father, but that’s really a stranger?,” said Baker.

So far, 30% of the DNA tests completed in the pilot program have not shown a relationship between the children and the people with whom they are crossing the border. Many adults confess to the false claims immediately.

Baker has found another way to focus on the children. With so many crossing alone, the need for bilingual foster families has grown. Needs such as these provide new ways of thinking about immigration beyond the headlines, and provide Baker with meaningful examples to share with her students on approaching complex issues holistically.

Through Baker’s classes, known as the social innovation lab, students are challenged to think about child migration, identify gaps and develop potential solutions. Out of that class has come work with several Waco organizations to create a system of support for unaccompanied children and foster families in the community who can help care for them. Other faculty engaged in the lab are working with students to develop resources that support communication between children and the lawyers available to help them – making navigation of the asylum process more understandable. Many of these efforts will launch in the coming year.

All told, Baker estimates that, to date, the remains of nearly 250 undocumented immigrants have been identified through the partnerships of her work, giving families an opportunity to grieve their loved ones. “Families don’t stop looking,” said Baker.

And neither will she.