At Home in Polluted Waters 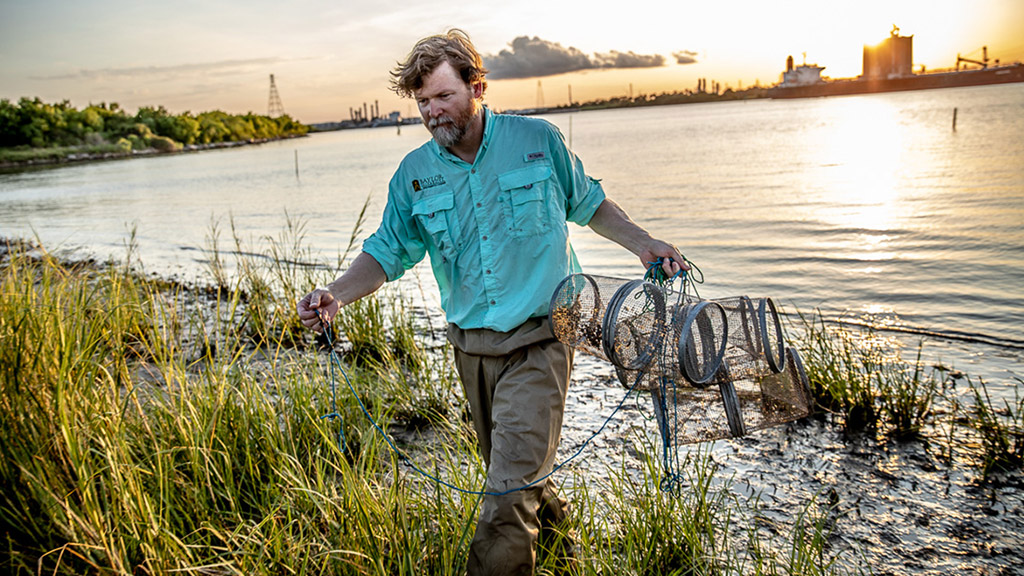 The waters in and along the Houston Ship Channel teem with evidence of human activity. Surrounded by miles of oil refineries and leading to the Port of Houston, one of the busiest seaports in the United States, the channel is highly polluted and inhospitable to aquatic life. Yet, the Gulf killifish thrives in that environment.

For Cole Matson, PhD, associate professor of environmental science and member of the Center for Reservoir and Aquatic Systems Research at Baylor, the Gulf killifish provided a fascinating case study, borne in part from the surprising speed at which they adapted to challenging conditions. Species evolution is typically thought of as an excruciatingly long process. Populations have the potential to survive by slowly adapting to new environments. However, the new environments that populations are finding themselves in are not changing slowly. Human influence is causing rapid change in extreme ways. One of the looming questions of conservation is if species can adapt quickly enough to save them from dying out. Matson and his laboratory team were able to answer that question after studying Gulf killifish populations from throughout the Houston Ship Channel.

“My particular interest is rapid adaptation,” said Matson. “We’ve known what role hybridization has played in evolution over extended amounts of geologic time, but we haven’t studied much the mechanism for which hybridization can influence short-term evolution because of extreme changes.”

In a paper recently published in Science, Matson and his team discovered that Gulf killifish populations expressed a gradient of resistance to toxicants, or toxic substances added to the environment, linked to heart deformities that followed the gradient of pollution levels in the channel. Exposing spawned individuals from 12 sample sites in and along the the channel to toxicants common in the channel revealed key distinctions between resistant, intermediate and sensitive populations. Killifish populations at sites with higher pollution levels exhibited greater resistance, while populations in the least polluted sites proved to be sensitive to pollution exposure.

So why are some Gulf killifish resistant and others are not? Matson and his team turned to genomic analysis of the populations to determine if genetic differences could explain the resistance. After sequencing the full genome of 288 individual Gulf killifish, the team had about 300 billion nucleotides of DNA. But the data wasn’t in order; the team had a terabyte worth of small pieces of genetic information of about 100 chromosomes each. They pieced together the genomes of each fish like a puzzle, using the already-sequenced genome of a sister taxon, the Atlantic killifish, as a template. The high volume of data required efficient and robust analysis.

Patching together the full genomes allowed for comparison between each individual fish countless times. The team looked for regions of the genomes that showed distinct differences between the resistant, intermediate and sensitive populations. Then, they zoomed in on those regions to see what genes were there.

“The basic tools are not new, but the challenges are new and different,” Matson says. “Advancements in bioinformatics and computing power allow us to ask simple questions a billion times.”

Mapping the introduction of Atlantic killifish genes to the Gulf showed that it is likely the hybridization occurred relatively recently and the resistant genes spread throughout the population in about 20 years. However, Matson emphasized that this event of rapid evolution is rare and only comes in the wake of massive mortality. Natural selection is driven by high selective pressure on species to survive; species will either evolve or they won’t.

“I think this is a cautious good-news story,” said Matson. “Not all species will pull a rabbit out of a hat.”

While rapid adaptation through hybridization helped the Gulf killifish to survive, hybridization doesn’t always benefit a species. Species melding together has the potential to decrease genetic diversity and could ill suit species for survival.

Such projects continue to require massive amounts of data and processing power, made possible through advancements in data sciences. Data science has made room for more collaboration in research, tying together multiple disciplines to answer the challenging questions of today’s rapidly changing environment.