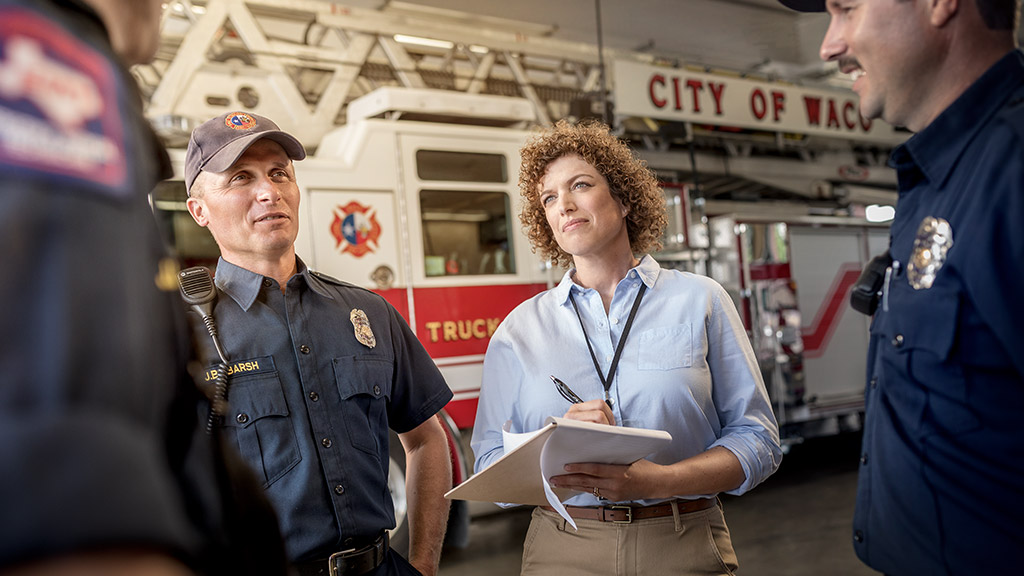 Community. For Sara Dolan, PhD, a nationally-recognized Baylor professor, researcher and psychologist, it's the place where her research finds its deepest meaning. A community can be literal--a city like West, Texas--or it can be a group bound by similar experiences or stages, like military veterans, children or families. However a community is defined, the people who comprise it will inevitably experience and share in challenges. It's in those moments that Dolan seeks to illuminate paths to recovery. Since coming to Baylor in 2007, she's put her groundbreaking research to work far outside the classroom.

"Everyone, at some point, experiences something traumatic. My focus is on trying to help people realize they can recover," Dolan, associate professor of psychology, says. "As a researcher, I've tried to be a citizen of the community and offer whatever services, expertise and help I might have."

The city of West, Texas, a tightly-knight community of 3,000 near Waco, experienced its darkest moment on April 17, 2013.

That evening, the West Fertilizer Company, a fertilizer plant adjacent to the local high school and scores of homes, caught fire and exploded. The blast killed 15 people, 12 of whom were first responders, injured hundreds and destroyed dozens of family homes. As a stunned community processed their grief, the men and women who pride themselves on helping their community--firefighters, police and other first responders--acutely felt the loss of colleagues and friends, as well as their own homes in the area.

Against the backdrop of tragedy, Dolan partnered with James Ellor, PhD, from Baylor's Diana R. Garland School of Social Work, to form a volunteer crisis intervention team that provided pro bono trauma assistance in coping with the disaster. In fire stations, community centers and makeshift trailers, Dolan and Ellor assisted first responders as they grappled with psychological needs, both immediate and long-term. Their service combined research-based methods with a heart for the hurting, in efforts that one first responder coined "rescuing the rescuers."

For the broader community, Dolan and colleagues welcomed West residents in need of assistance as they processed their grief. Working alongside state and local agencies, Dolan would learn of individuals dealing with the trauma, and would travel to meet them on front porches, in living rooms and in cars. Amidst tears and loss, she noticed something else begin to emerge throughout the long hours: resilience.

"I learned that, even in disaster, people are very resilient," Dolan says. "I also saw people discover that trauma doesn't have to be a permanent scar on their soul. They're going to learn from it and they're going to recover."

In the months after the blast, Dolan began coalescing the varied experiences of working with the people of West into research and programs to benefit others dealing with trauma.

Published research on ways clergy can partner with psychologists to engage client's spiritual needs advanced understanding of religious beliefs in healing. Further, Dolan and Ellor partnered with public health officials in McLennan County, Texas, to create the Psychological Intervention Team within the Waco-McLennan County Medical Reserve Corps. The team works with leaders and volunteers from the community to prepare and provide behavioral health support in times of crisis, and has responded to situations since its founding that include the sheltering of hurricane survivors. Those efforts earned Dolan and Ellor the 2013 Jack Colley Citizen Corps Leadership Award by the Texas Association of Regional Councils, an award normally given to police, fire or other emergency professionals.

"One of the reasons I came to Baylor was the option to do this kind of research," Dolan says, "to do projects where can really take your expertise as an academic researcher and impact the community."

Dolan's work in West fits a career-long pattern. Among dozens of published articles on trauma, resilience and recovery, the theme of community shines through. In addition to the Medical Reserve Corps, Dolan partners with the Waco Veterans Affairs (VA) Center for Excellence to study and aid in life functioning with returning veterans in areas like addiction, sleep and more. She currently also serves with the Texas Psychological Association's Disaster Response Network, which responds to disasters like wildfires, tornados and mass shootings. More recently, she received a $3 million grant from the Substance Abuse and Mental Health Services Administration to oversee the development and implementation of new evidence-based assessments for mental health professionals to provide children dealing with trauma.

Such efforts have earned Dolan the designation of "Citizen Psychologist," awarded to just 30 practitioners nationally, from the American Psychological Association (APA). Citizen Psychologists are chosen for leadership in their communities through public service, volunteerism and other strategic roles beyond the day-to-day work of the practice and teaching of psychology. According to the APA, citizen psychologists "serve as leaders in their various communities ... (that) contribute to improving people's lives."

"That's very special and a symbol that I've been able to come here to Baylor and make a positive impact on the community as a research-based psychologist who cares about people and their wellbeing," Dolan says. "You can help so many people through research, and I'm thrilled that, through Illuminate, research is more of a primary focus here at Baylor. With everyone paddling in the same direction, I think Baylor is in a really great position to impact an even larger segment of the community, and it's exciting to be a part."