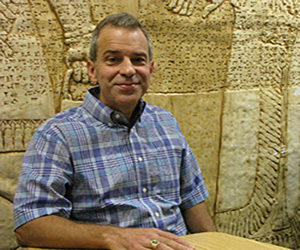 Dr. Joel Burnett brings to Baylor’s Old Testament area essential scholarship on the religious life of Israel and its Iron Age neighbors, a focus that taps into major growth areas in his field. As he teaches in these areas, in close connection with his research, Dr. Burnett works to form independent researchers attuned to the history and current state of the field and well versed in its primary texts and languages. One of the area’s strengths, as he sees it, is its capacity to hold together these emphases on historical, cultural, and material particularity with interest in the biblical text and its theological implications as sacred Scripture. “I think we do a good job of doing all of that here.” Dr. Burnett observes that, in addition to the breadth and overall “coherence” of specializations within the Old Testament faculty, all of its members are actively involved and advancing in their fields, contributing to a department that is “still on the ascent... and that benefits the students who come here.”