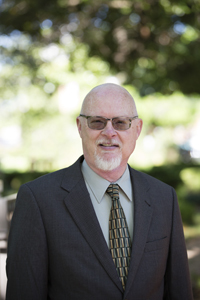 Jim Kennedy was born and reared in Jacksonville, Florida. Although his formal education occurred east of the Mississippi, he considers it as beginning in earnest when he started teaching at Baylor in 1986. Dr. Kennedy realized early in his undergraduate education at Palm Beach Atlantic College (now, Palm Beach Atlantic University) that he wanted to engage a lifetime of study and teaching of the Bible, particularly the Hebrew documents of the Old Testament. This realization sustained him through the challenging years of theological education in seminary and then graduate school, culminating in the Ph.D. in biblical studies from Drew University in 1986. Dr. Kennedy believes that teaching must involve not only giving information to students in class settings, but in learning with them and so leading students to think of themselves as teachers as well. Teaching is never a one way proposition.

"The Roots ysr and 'sr in the Book of Hosea: A Case of Rhetorical Ambiguity," Southwest Commission on Religious Studies/ Society of Biblical Literature, Irving, Texas. March 9, 1990.

"O Human Being: The Rhetoric of Iconoclasm in the Book of Ezekiel," Society of Biblical Literature, New Orleans, Louisiana, November 20, 1990. Also presented to the Southwest Biblical Studies Seminar, Perkins School of Theology, October 5, 1990."Theophany and Anti-Theophany in the Book of Ezekiel: A Reading of Ezekiel 8-11," Southwest Commission on Religious Studies/ Society of Biblical Literature, Irving, Texas. March 16, 1991.

"Reading Ezekiel as a Composition," Paper presented as a panelist on the steering committee of the Ezekiel Consultation, The Society of Biblical Literature, November, 1994.

"The Lord's Strongman? The Characterization of Hezekiah in the Book of Isaiah." Society of Biblical Literature, Toronto, Canada. Sunday, November 24, 2002. This paper was also presented to the SWRSBL in March of 2003.

"Yahweh's Strongman? The Characterization of Hezekiah in the Book of Isaiah," Perspectives in Religious Studies 31 (2004): 383-397.

"Consider the Source: A Reading of the Servant's Identity and Task in Isaiah 42," in The Desert Will Bloom: Poetic Visions in Isaiah. SBL Ancient Israel and Its Literature. Edited by A. Joseph Everson and Hyun Chun Paul Kim. Atlanta: Society of Biblical Literature, 2009. Pages 181-196.

Van der Toorn, Karel. Family Religion in Babylonia, Syria and Israel: Continuity and Change in the forms of Religious Life. Studies in the History and Culture of the Ancient Near East, 7, New York: E. J. Brill, 1996. In Catholic Biblical Quarterly. 61 (1999): 765-767.

Sharon, Diane M. Patterns of Destiny, Narrative Structures of Foundation and Doom in the Hebrew Bible. Eisenbrauns: Winon Lake, Ind.: 2002. In The Review of Biblical Literature, 11/2002.

Glazov, Gregory Yuri. The Bridling of the Tongue and the Opening of the Mouth in Biblical Prophecy. Sheffield, England: Sheffield Academic Press, 2001. In Review of Biblical Literature, 5/2003.