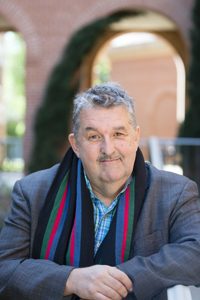 Christian van Gorder was born in Pittsburgh in 1960, the third child of a father who grew up on a farm and became a lawyer, and a schoolteacher from Southern Germany. He finished courses in English Literature and Biblical Studies at the University of Pittsburgh and Oral Roberts University and World Religions at Asbury Theological Seminary before completing his doctorate in Muslim and Christian Relations at the Queen's University of Belfast, Ireland. Christian has also completed courses at the American Hellenic University in Greece, Trinity College in Dublin, Ireland and the National University of Singapore. He lived in Western China for six years where he taught intercultural studies at the Yunnan University in Kunming. Christian also worked for four years for a Dutch human rights organization serving persecuted Christians based in the Netherlands called Open Doors International. Christian taught World Religions for seven years at Messiah College in Central Pennsylvania before coming to Baylor in 2004 to focus on Islamic Studies as well as to continue to teach introductory courses in the World's Religions. Christian is married to Vivian and has seven wonderful children, Patrick, Brendan, Keegan, Sean Michael, Tatijana, Gretchen, and Andrew, and, in 2018, the quadruplets – Erik, Tristan, Clare, and Grace.

Jews and Christians Together: An Invitation to Mutual Respect. (Eugene, Oregon: Cascade Books, 2020).

No God but God: A Path to Muslim-Christian Discussions about the Nature of God (Maryknoll, New York: Orbis Books, 2003).

Muslim and Christian Relations in Nigeria (2009).

"There is No Enemy - None is the Other: Promoting Christian and Sikh Mutuality." Interreligious Insight, December 2011.

"Portraits of Islam in Christianity Today In the Six Months Following 9/11" with Heather M. Gorman. Journal of Religious Studies, October 2011

"Why not Laugh with the Rose: The Spirituality of Laughter in the Poetry of Jalal al-din Rumi." Interreligious Insight: Journal of Dialogue and Engagement , July, 2012.

"Pedagogy for the Children of the Oppressors: Liberative Education for Social Justice." Paper Presented at the University of Denver Conference on Pedagogy for Liberation, April, 2009.

"Preferring Your Brother: The Writings of al-Ghazali as a Resource to Improve Muslim and Christian Interaction" Paper Presented at the Baylor University Institute for Faith and Learning Conference on Friendship, October, 2007. Paper being revised for publication consideration.

"Pedagogy for the Children of the Oppressor: Paulo Freire's Liberative Education for Social Justice in the Context of North American Faith-Based Higher Education." Published in the Journal of Transformative Education, May 2007. Paper presented at the Spirituality, Pedagogy and Social Justice Conference, Calvin College, Grand Rapids, MI: September 22, 2005. Second version of paper presented at the Federal University of Bahia, October 19, 2006, Salvador, Bahia

"Armenian Christian and Turkish Muslims: Prospects for Reconciliation through Interfaith Dialogue on the Events of History." Published, Islam and Christian-Muslim Relations, volume 17, no. 2, pages 173-194, April 2006.

"Social Justice Partnerships between Muslims and Christians." Chapter in a book entitled "The Language of Diversity" - Cambridge University Press, November/December 2007.

"Beyond the Rivers of Ethiopia: The Afrocentric Pentecostalism of Mensa Otabil" Pneuma, forthcoming, spring 2008.

"The Steppe is Cruel and Heaven is Far: Muslim-Christian Relations in Central Asia." Paper presented at the Conference on Global Christianity, Baylor University, November 10, 2005

Review of "Sacred Fury: Understanding Religious Violence" by Charles Selengut in the Journal of Dialogue and Alliance, New York, Summer 2004, vol.18., no. 1, 85-88.

"Why Not Laugh With The Rose: The Spirituality of Laughter in the Poetry of Jalal al-din Rumi." Art and Soul Conference, Baylor University Institute of Faith and Learning, April, 2005. Submitted (Fall, 2007) for publication with Interreligious Insight.