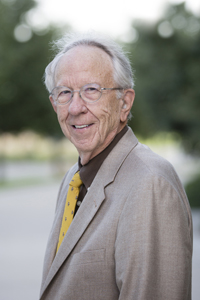 Ralph C. Wood has served as University Professor of Theology and Literature at Baylor since 1998. He holds the B.A. and M.A. from East Texas State College (now Texas A&M University-Commerce) as well as the A.M. and Ph.D. from the University of Chicago. From 1971-1997 he taught at Wake Forest University in Winston-Salem, North Carolina, where he was the John Allen Easley Professor of Religion from 1990. At Baylor, he has a graduate appointment in Religion, though he teaches entirely in the Great Texts program. He serves as an editorial board member for both the Flannery O’Connor Review and Seven: An Anglo-American Literary Review. He has also taught at Providence College in Rhode Island, at Samford University in Birmingham, and at Regent College in Vancouver.

"I seek to interpret several of the major literary texts of the West, especially of the 19th and 20th centuries, from a confessionally Christian angle of vision. My aim is to show the relevance of these books to the witness of the Church as well as to the life of secular culture."

One of 12 scholars invited to join the American Literature and Religion Project sponsored by the Pew Charitable Trusts and the Erasmus Institute of Notre Dame, 2001-2005.

Chief author of a successful proposal to the Henry Luce Foundation for a three year, $75,000 program entitled "Religion and the Social Crisis," 1981 84.

National Endowment for the Humanities Fellowship for College Teachers, 1982-83. Topic: "The Comedy of Redemption: Literary Vision and Theological Doctrine in Six Modern Writers."

Preaching and Professing: Sermons by a Teacher Seeking to Profess the Gospel (Grand Rapids, MI: Eerdmans, 2009).

Contending for the Faith: Essays in the Church's Engagement with Culture. Waco, Texas: Baylor University Press, 2003.

The Gospel According to Tolkien: Visions of the Kingdom in Middle-earth. Louisville, Kentucky: Westminster John Knox Press, 2003.

“Why tolerance and voluntaryism are bad ideas: Stanley Hauerwas’s summons to Baptists and other ‘enlightened, Christians,” Review and Expositor 112 (2015): 71–80.

"Confronting the World's Weirdness: J. R. R. Tolkien's The Children of Húrin," in The Ring and the Cross: Christianity and The Lord of the Rings, ed. Paul E. Kerry (Madison, NJ: Fairleigh Dickinson University Press; Plymouth, UK: Rowman and Littlefield, 2011): 145-51.

“‘God May Strike You Thisaway’: Flannery O’Connor and Simone Weil on Affliction and Joy,” in Flannery O’Connor in the Age of Terrorism: Essays on Violence and Grace, eds. Avis Hewitt and Robert Donahoo (Knoxville, TN: University of Tennessee Press, 2010): 41-58.

"How the Church Became Invisible: A Christian Reading of American Literary Tradition," (with Stanley Hauerwas) Religion and Literature 38, 1 (Spring 2006): 61-93.

"Dostoevsky on Evil as a Perversion of Personhood: A Reading of Ivan Karamazov and the Grand Inquisitor," Perspectives in Religious Studies 26, 3 (Fall 1999): 331-48.