For information on the ongoing renovation of Tidwell, click here 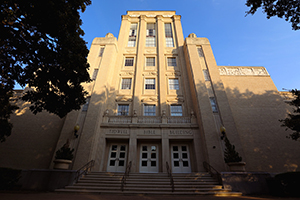 The Tidwell Bible Building is a living memorial to Josiah Blake Tidwell.

More than block upon block and stone upon stone, the building is a place for research and instruction and worship – where Baylor University students through generations of the future may catch a glimpse of the Christian imperative.

The building also is a symbol, telling the world that Biblical truths stand at the center of education at Baylor and evidencing the University's dedication to Christian service. Josiah Blake Tidwell taught the riches of the Scriptures to Baylor students for thirty-six years. He loved young people. He loved the Word of God. He believed devoutly that learning gained in the arts and sciences should be leavened with the Truth of the Christian gospel – giving a reason and a direction for the use of that knowledge.

The thousands of students who studied under Dr. Tidwell realized the greatness of the treasure he had given them. They sought some way to perpetuate to generations of the future his fervor for spiritual understanding and Christian citizenship. Their mutual hopes were organized when 125 met together during the 1936 session of the Baptist General Convention of Texas at Mineral Wells. They projected plans for erection of a Tidwell Bible Building on Baylor's campus, and launched a campaign for funds to bring it to pass.

Eighteen years passed before their dream was realized and thousands of others joined in their plan. The building became a reality in the fall of 1954 – not the simple structure for which they planned, but a magnificent building of seven floors costing some six times their original estimate.

Sixty-eight limestone panels, each weighing a ton and carefully carved by talented craftsmen, tell the story of the Bible in a panorama twice encircling the Tidwell Bible Building.

Sculptors Ira Correll and son, of Austin, were called in to do the carving. Religion professors at Baylor planned out the pictorial representation of the Scriptures.

The Old Testament story is told on the tower, beginning on the west side of the panel with the Creation. Panels on the New Testament begin also on the west side, facing Speight Avenue, along the third floor of the building.

In the order of their appearance, here is a list of the panels:

"More Than A Memorial," The Texas Collection, Baylor University.