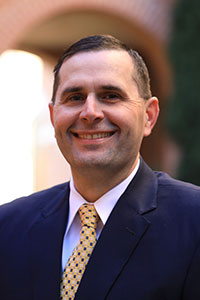 Dr. Wes Null was appointed Vice Provost for Undergraduate Education in January 2011. Prior to beginning his role as Vice Provost, Dr. Null served as associate dean within Baylor's Honors College, acting director of the University's Honors Program, and founding director of Baylor's Ph.D. in Curriculum & Teaching program. Dr. Null joined the Baylor faculty in 2001. He serves as a Professor of Curriculum & Foundations of Education while holding faculty appointments in the School of Education and the Honors College.

As an educational historian who is deeply committed to the ideal of universal liberal education, Dr. Null conducts research on the history of American education and curriculum theory. His books include Curriculum: From Theory to Practice (2016), American Educational Thought:  Essays from 1640 to 1940 (2010), Peerless Educator:  The Life and Work of Isaac Leon Kandel (2007), Forgotten Heroes of American Education: The Great Tradition of Teaching Teachers (2006), and A Disciplined Progressive Educator: The Life and Career of William Chandler Bagley (2003). Dr. Null served as president of the American Association for Teaching and Curriculum from 2010 to 2011 and as editor of the American Educational History Journal from 2006 to 2011.

As Vice Provost for Undergraduate Education and Institutional Effectiveness, Dr. Null oversees all aspects of the university's SACSCOC accreditation efforts, supervises the process of undergraduate curriculum revision, coordinates with all academic units on campus to achieve goals related to student success, collaborates with other universities/colleges to establish articulation and exchange agreements, and works to provide a common vision for undergraduate education at Baylor.

Dr. Null holds a Ph.D. degree from the University of Texas at Austin and B.S.Ed. and M.Ed. degrees from Eastern New Mexico University.

Office of the Provost