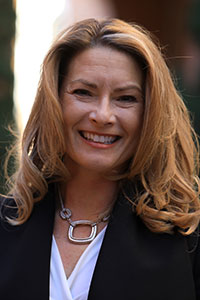 Dr. Lori Baker is a professor of anthropology in Baylor’s College of Arts and Sciences with a specialization in molecular and forensic analysis of skeletal remains. She holds a B.A. and an M.A. from Baylor and a Ph.D. from the University of Tennessee, Knoxville. Dr. Baker serves as chair of the President’s Advisory Council on Diversity (PACD), and is past chair of the Faculty Senate (2014-15) and also served as the Faculty Regent on the University’s Board of Regents.

She is founder and executive director of Reuniting Families, a program she founded at Baylor in 2003 that aids in the identification and repatriation of undocumented immigrants who perish during migration into the United States. She has acted as an advisor to the attorney general of the Mexican State of Chihuahua, the Washington Office on Latin America, the U.S. Agency for International Development, and Truth Commissions in Peru and Panama.

She has been an invited speaker in many national and international venues such as the Peace Palace in the The Hague, as part of the International Commission on Missing Persons Conference and Amnesty International. Dr. Baker is a member of the American Academy of Forensic Sciences and has published in national and international journals. Her work has been featured by National Geographic, Scientific American, Discover Magazine, the Washington Post, USA Today, the Wall Street Journal,NPR, BBC, MSNBC and other media outlets.

Office of the Provost