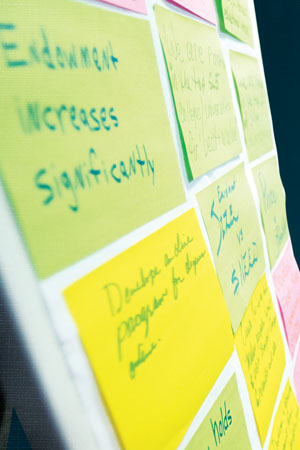 Pro Futuris is the result of a deliberately open and participatory planning process spanning 18 months. Guided by a renewed commitment to the universitys foundational assumptions, core convictions, unifying academic themes, and mission statement, the process actively engaged constituents across all ages and interests. Community Input Sessions stretching from Los Angeles to New York City welcomed over 700 alumni and friends for discussions about their dreams for Baylors future. Thousands of faculty, staff, and students provided input individually and in groups. Still hundreds more among the Baylor family provided individual input into the future direction of the university.

Input was studied, analyzed, and synthesized by a 23-member committee, drawn from the universitys faculty, staff, and students. Each submission was read and categorized multiple times by multiple committee members whose work culminated in the production of the Strategic Input Report, a distillation of thousands of pages of data that captured both the areas about which there was significant consensus as well as fairly recording differing viewpoints.

The universitys Board of Regents, President Ken Starr, Executive Vice President and Provost Elizabeth Davis, and the Executive Council, with assistance from the Academic Deans and Vice Provosts, deliberated the findings from the Strategic Input Report and crafted a draft of Pro Futuris. This draft was released to the Baylor family in December 2011, and alumni, faculty, staff, students, and friends of the university continued their active participation in the visions development by providing targeted feedback about how the draft vision could be improved. These responses were examined by the 23-member committee and incorporated by university leadership into the final release of Pro Futuris. The vision was adopted by the Baylor Board of Regents on May 11, 2012.