What an exciting time for Baylor as we’ve surpassed the $1.1 billion fundraising goal of the Give Light campaign! Nearly 80,000 members of the Baylor Family have given or pledged to the comprehensive campaign, which will have long-lasting impacts across the University. The campaign to date has:

Give Light also has supported Baylor’s recent achievement of R1 status – now one of only 39 private R1 institutions nationwide. The team at BaylorProud reached out to several faculty members and summarized three ways in which R1 status will impact Baylor’s future:

Thank you, faculty and staff, for your dedication to excellence and your commitment to Baylor’s mission. And we appreciate the Baylor Family for your ongoing support of the University and the continuation of the Give Light campaign.

Some updates for this week:

Block off your calendar this Saturday for a Big 12 basketball doubleheader at the Ferrell Center! Be sure to “Go Gold” as the men face Texas at 11 a.m. Then wear pink in support of breast cancer awareness as the women host West Virginia at 5 p.m. in their annual Play4Kay game.

PHOTO OF THE WEEK 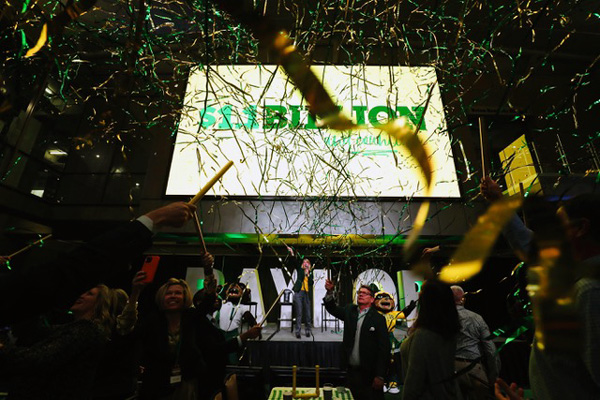 Streams of confetti filled the College Football Hall of Fame last Thursday as we celebrated reaching Give Light’s $1.1 billion goal with members of the Baylor Family in Atlanta.