Doctor of Philosophy, May 2017 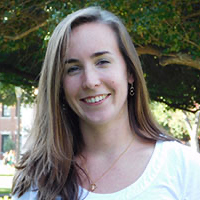 Christine Basil received her doctorate from Baylor University’s Graduate Program of Political Science in May 2017. Her primary field of study is in political theory, with an emphasis on classical political thought, though she has had extensive training and teaching experience in the field of American political thought and modern political thought. Her dissertation (“Who Am I to Judge? Rhetoric, Passion, and the Rule of Law in Aristotle’s Political Thought”) received the department’s Outstanding Dissertation award in 2017.

Christine also taught in the Core Texts at Oglethorpe University, and as a Visiting Assistant Professor of Government at Morehead State University. Courses taught include Western Political Thought, Modern Ideologies, American Constitutional Development, and Civic and Regional Engagement. She holds her M.A. from Baylor University and her B.A. in Government and Political Science from Belmont Abbey College.