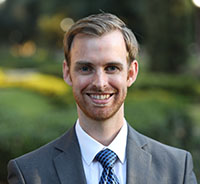 Jordan Cash is a Lecturer in the Political Science Department and the Director of the Zavala Program for Constitutional Studies. He studies American institutions, constitutional law, political theory, and race and ethnic politics. His current book project, which is under contract with Oxford University Press, examines how presidents who were isolated from other institutions used their constitutional authority to achieve their policy goals, providing a clearer view of the office’s constitutional logic and baseline of authority. He is also working on a book on presidential decision-making in the annexation of Texas which is under contract with the University Press of Kansas, and an edited volume of original congressional debates under contract with Hackett Publishing. His work has appeared or is forthcoming in Polity, American Political Thought, Presidential Studies Quarterly, Law and History Review, Congress and the Presidency, Journal of Transatlantic Studies, and Laws. He has also published chapters in several edited volumes, as well as book reviews and encyclopedia entries. He received his B.A. in History and Political Science from the University of Nebraska-Omaha, and his M.A. and Ph.D. from Baylor University. From 2018-2020 he was a fellow in the Program on Constitutionalism and Democracy at the University of Virginia.

PSC 1387 The U.S. Constitution, Its Interpretation, and the American Political Experience

“‘A Purer Form of Government;: African American Constitutionalism in the Founding of Liberia.” Journal of Transatlantic Studies 19, no. 4 (December 2021): 408-440.

“George Sutherland and the Contextualization of Executive Power.” American Political Thought 9, no. 1 (Winter 2020): 50-84.