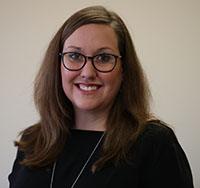 Curriculum Vitae
Rebecca McCumbers Flavin joined the Baylor faculty as a lecturer in Fall 2010 from the University of Notre Dame. Her dissertation, The Battle of the Unarmed Prophets: Religion and Republicanism in the Thought of Girolamo Savonarola and Niccolo Machiavelli, examines the similarities and differences between the models of church/state relations proposed by both thinkers. McCumbers Flavin has research and teaching experience in constitutional law, the history of political philosophy, and American politics, particularly in the area of religion and politics.

PSC 2343 Introduction to Western Political Philosophy
An overview of the Western tradition of political philosophy from Ancient Greece to present day.

PSC 3375 Model United Nations
An overview of the United Nations, including its origins, the six principal organs established by the UN charter, the UN's role in international relations, and the functions of the General Assembly and Security Council. Emphasis is on the in-depth study of several UN member countries. Through research projects, oral reports, and in-class simulations, students will gain an understanding of how countries participate and cast votes in the General Assembly.

PSC 4361American Constitutional Law
Constitutional law of the United States with basic cases concerning such subjects as separation of powers, federalism, the taxing and spending powers, and interstate and foreign commerce.

PSC 4370 Politics and Religion
The dynamic interaction between religion and politics in the United States and other countries, including the effect of political outcomes in the context of voting, legislative and executive policymaking, and the law.

PSC 4381 American Constitutional Law
Continuation of PSC 4361, but may be taken independently of that offering. Deals with those cases relating particularly to personal liberty and civil rights