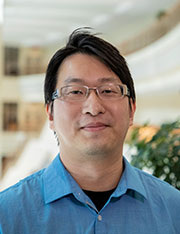 Dr. Howard Lee is an Assistant Professor in the Department of Physics at Baylor University since October 2015. He is also Fellow in the Institute for Quantum Science and Engineering (IQSE) at Texas A&M University. He was a Postdoctoral Fellow at California Institute of Technology, working with Professor Harry Atwater in the Applied Physics and Materials Science Department. He received his PhD in Physics from the Max Planck Institute for the Science of Light in Germany in 2012 under the supervision of Professor Philip Russell (2015 President of OSA).

His research focuses on developing new techniques, including novel active materials and nanostructures, to actively control the optical properties of nano-optical structures (e.g., plasmonics and metamaterials) for studying new optical physics and light-matter interaction at the nanometer scale, as well as advancing novel optical components with new functionality. Dr. Lee is the recipient of the 2017 DARPA Young Faculty Award, a 2017 Baylor Young Investigator Development Award, and a 2016 Baylor Proposal Development Award, 2012 Croucher Postdoctoral Fellowship. His work on nano-optics, plasmonics and photonic crystals has led to 23 papers published in various journals, such as Science, Nano Letters, Advanced Materials, Optics Letters and Applied Physics Letters, as well as 30 invited talks and 90 conference papers.

The Institute For Quantum Science and Engineering, Texas A&M