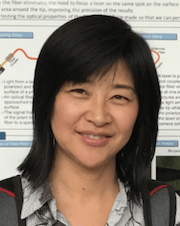 Dr. Zhang joined the Baylor faculty in January 2010 and was promoted to associate professor in 2016. Prior to coming to Baylor, she held a postdoctoral position in the University of Innsbruck, Austria (2002-2004) with Prof. Erminald Bertel and a joint postdoctoral position in Pacific Northwest National Laboratory (PNNL) with Zdenek Dohnalek and the University of Texas at Austin with J. Mike White (2004-2009). During her time at PNNL, she was awarded the M. T. Thomas Award by the Department of Energy’s Environmental Molecular Sciences Laboratory. She held a Leopold-Franzens-Universität Innsbruck Guest Professorship at the University of Innsbruck, Austria in 2018. She was awarded the Creativity Award by the NSF Chemistry Division in 2021.

Dr. Zhang's research interests are in two areas. One is energy and environment-related catalytic chemical physics, specifically, understanding the mechanisms and dynamics of catalytic reactions on various catalysts (i.e. metal oxides and two-dimensional materials) by using scanning probe microscopy (SPM) coupled with Raman spectroscopy. The other is in plasmonic and photonics. Her recent research interest is to develop nanoscale chemical imaging techniques for the investigation of the structure-functionality of the materials in realistic conditions. These hybrid techniques integrate plasmonics, fiber optics, and nanoscale surface imaging.