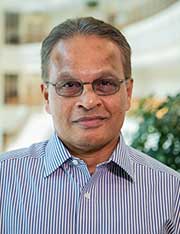 Dr. Ariyasinghe was born and grew up in Sri Lanka. He received B.Sc. (Hon.) from University of Sri Lanka in 1978. After working three years (1978 - 1981) as an assistant lecturer at the University of Sri Lanka, he attended Bowling Green State University (1981 - 1983) where he received M.S. in Physics. Subsequently, he attended graduate school at Baylor University (1983 - 1987) and earned the Ph.D. in Physics. After working one year as a lecturer at University of Sri Lanka, he joined Baylor faculty as a post doctoral fellow in June 1988. Prior to becoming an associate professor, he served as a lecturer (1990 - 1998), a senior lecturer (1998 - 2002), and an assistant professor (2002 - 2005). He enjoys traveling, working with children, and partaking in sports (cross-country, table tennis, swimming and cricket).

Dr. Ariyasinghe's research interests are in the area of atomic and molecular physics. He conducts research to understand the interaction of electron beams and ion (H+ and He+) beams with atoms and molecules.