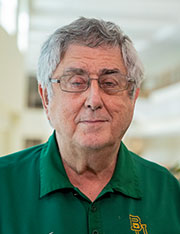 Randy was president and CEO of DIGATEX, Inc., a developer and supplier of route accounting and management software for soft drink bottlers and other food and beverage distributors (1978 - 2007). He is married to Cathey L. Hall (BSEd Baylor 1973) and they have a daughter Jessica (BBA Baylor 2006) who is a family law attorney in Southlake, Texas.