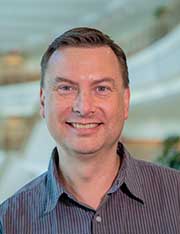 As an undergraduate, Dr. Dittmann gained research experience by participating for two summers in the Research Experience for Undergraduates (REU) program at Michigan State University, where he worked at the National Superconducting Cyclotron Laboratory. He also performed research with the MEGA Collaboration at the Los Alamos Meson Physics Facility in New Mexico.

Dr. Dittmann's love for experimental physics grew out of a childhood passion for tinkering with buttons, switches, and other devices. He enjoys puzzles and games, music, computers, and basketball. He lives in Hewitt, TX, with his wife Jeanne, a professional calligrapher, and sons Andrew and Paul.

Dr. Dittmann is engaged in experimental elementary particle physics, the science of the fundamental nature of matter and energy. As a member of the Compact Muon Solenoid (CMS) collaboration, he investigates the properties of particles produced in proton-proton collisions at the Large Hadron Collider at CERN in Geneva, Switzerland. He was involved in the search for and discovery of the infamous Higgs boson, one of the most exciting discoveries of particle physics. In addition, Dr. Dittmann is interested in Quantum Chromodymanics (QCD) and other searches for new phenomena.