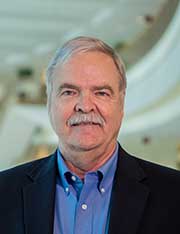 Dr. Benesh is a native Texan, but came to Baylor in 1982 from a postdoctoral research position at the University of Cambridge, England. He earned his B.A. degree from Rice University, and M.S. and Ph.D. degrees from Northwestern University. Since January 2006, Dr. Benesh has served as Chairman of the Physics Department, having previously served as Director of Graduate Studies and as University Ombudsman. In his free time he enjoys playing racquetball, watching baseball games, and doing chores around his ranch.

Dr. Benesh's research interests include general relativity, everyday physics phenomena, the electronic structure of solids, interactions at surfaces, and various types of embedding problems. Examples of embedding problems include local magnetic moments arising from transition metal impurities in paramagnetic crystals, vacancies, chemisorbed molecules on surfaces, and surfaces themselves--which are merely two-dimensional impurities in a three-dimensional crystal. Although there are many approaches to studying embedding problems, the work at Baylor focuses on two quite different techniques: surface embedding via an embedding potential derived from the bulk Green function, and embedding through imposition of a boundary condition that wave functions maximally break time-reversal symmetry. The former approach allows the influence of the underlying substrate to be included in surface calculations by means of the embedding potential. The second approach mimics the influence of the substrate by requiring that wave functions at the boundary carry maximal currents.

Asymptotics of Solutions of a Perfect Fluid Coupled with a Cosmological Constant in Four-Dimensional Spacetime with Toroidal Symmetry; with Anzhong Wang, Gen. Relativ. Grav. 38, 345-364 (2006).