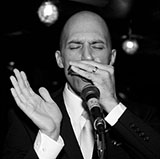 The Baylor Institute for Oral History announces the awarding of its 2014-2015 Charlton Oral History Research Grant to Dr. Roger Davis Gatchet, assistant professor at Eastern New Mexico University, to support his project titled “Talking the Blues: An Oral History of Blues Musicians in Austin, Texas.” The goal of the Charlton Oral History Research Grant is to bring the strengths of oral history to new topics of investigation, create partnerships with scholars doing noteworthy fieldwork with oral history, build a substantial research collection at Baylor University through the work of a skilled oral historian, and provide long-term scholarly access to significant applications of oral history methodology that model best practices. First awarded in 2011, the grant is named for the Institute’s founder, Dr. Thomas L. Charlton, who is well known for his widespread encouragement of scholarship in oral history. Dr. Gatchet’s research focuses on the underdocumented blues scene in Austin, highlighting the blues artists against the background of the city’s race relations story, both past and present. Well known as a center for country music, Austin also has a rich history of blues, once anchored in the predominantly African American East Side but now more integrated and widespread. A specialist in rhetoric and language and a seasoned oral historian, Dr. Gatchet’s research interests include the rhetoric of authenticity, popular culture, and popular music. Interviews he conducts for the Charlton Grant will supplement earlier interviews he gathered with Austin blues artists and will contribute to the publication of both a scholarly work on blues, race, and the rhetoric of authenticity and a popular book specifically on Austin’s blues scene. Dr. Gatchet brings to the project his close personal connections among blues performers , particularly in Austin, where he hosted a weekly blues radio program during his student and assistant instructor years at the University of Texas. He also performs blues harmonica and writes for Living Blues magazine. Dr. Gatchet’s research on blues will stand alongside the Institute’s substantial collection of oral histories with western swing and black gospel music performers and contribute new understandings to our significant collection on race relations and the civil rights movement. Learn more about his research plans and about earlier recipients of the grant at Charlton Oral History Research Grant .