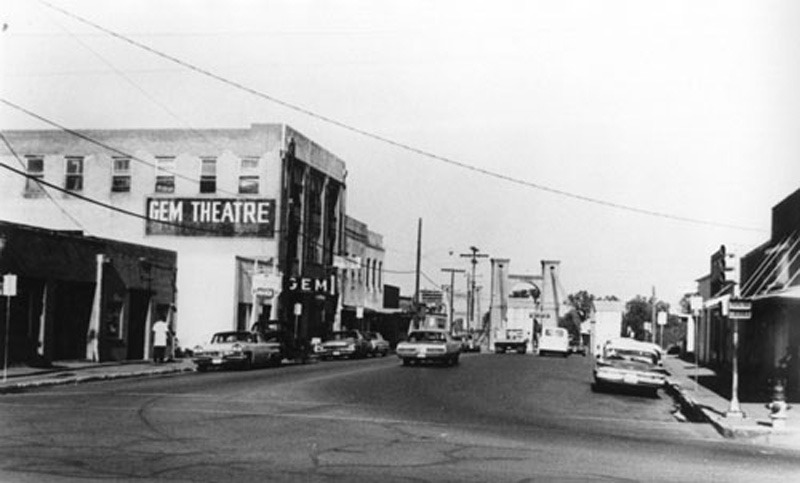 Photo courtesy of The Texas Collection

For 119 years, Bridge Street linked Waco's central business district with businesses and communities across the Brazos River. On March 1, 1849, the first town lots in Waco Village were surveyed and sold along a one-block thoroughfare leading from a ferry landing on the southwestern banks of the river to the edge of the future town square. From that day forward, that road, eventually named Bridge Street, and its extension on the opposite side of the town square, named Austin Avenue, marked the north-south dividing line for the intersecting numbered streets.

Known first as Main Street, the dirt road became Bridge Street about 1870 when the remarkable Waco Suspension Bridge replaced the old river ferry. By then, the dilapidated state of the wood frame structures along the block earned it the nickname Rat Row. Fire swept down the street in 1871 and destroyed Rat Row.Businesses rebuilt, this time with brick, and the street’s good reputation was restored. In September 1872, on the other side of the river, the town’s first railroad depot opened for business. Soon commerce developed between the tracks and bridge along what became known as East Bridge Street.

Bridge Street, sometimes called Bridge Avenue, was the victim of major fires and floods over its lifetime, but time after time it arose from the ashes and mud. Then, on May 11, 1953, a record-breaking tornado destroyed the heart of downtown Waco and killed 114 people. For another fifteen years, a few businesses on Bridge Street hung on to life amid vacant lots. In 1968, though, the City of Waco, under the federal program known as urban renewal, erected its convention center over the site once occupied by the square and Bridge Street. Today no remnants remain of the historic downtown portion of Bridge Street and only a few blocks remain of old East Bridge Street on the other side of the river.

Throughout its long history, Bridge Street was one of the threads composing the complex fabric of life and culture for Waco’s African American citizens. For most of the life of Bridge Street, Waco abided by both the written and unwritten rules of racial segregation that oppressed black people across the American South. In fact, horrific lynchings of black men by white mobs in 1905, 1916, and 1922 earned Waco an unsavory reputation for racially-motivated violence. White employers, stores, and professional people throughout Waco openly discriminated against African Americans. Not until 1965 did the city achieve a peaceful, if reluctant, integration of public businesses. Within the black community, people responded conservatively to discrimination while working quietly toward economic independence. Individual entrepreneurs ran their own shops or formed partnerships to provide important services to the black community. On Bridge Street, by the 1890s, the black population began to find welcome in a variety of commercial and professional enterprises owned and/or operated by African Americans.

Also, Bridge Street connected black Wacoans with the center of downtown. By the turn of the twentieth century, businesses and professional offices owned by and opened to African Americans intermingled with businesses operated by whites and immigrants along Second Street, north and south, and appeared on Franklin and Washington Avenues and Mary and Jackson Streets. That trend continued along the south side of the square and up onto Austin Avenue.