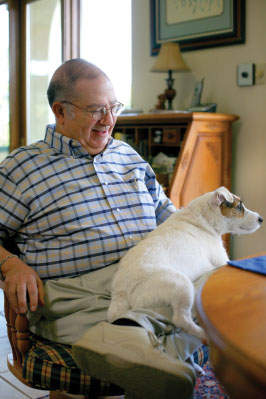 Thomas Gabriel Salome was born on January 14, 1932 in St. Paul's Hospital in Dallas, Texas. His father Tom immigrated to the United States in 1905 when he was ten years old and settled in Hillsboro, Texas where years later he met and married his wife, Annie. They eventually moved to Waco where Tom ran a small twenty-four hour grocery store located five blocks from Baylor University. Mr. Salome was the eldest of five children, having three sisters and one brother. At the age of eight he began to help as a clerk in his father's store, and worked there until the store was sold when he was fourteen. Mr. Salome attended Sacred Heart Academy Catholic School for his elementary years, then South Junior and Waco High School. Excelling in math, Mr. Salome entered the Baylor University Business School in 1949 to pursue degrees in economics and accounting. As a freshman he met the love of his life, Martha Baur, at a local church function and the two married approximately four years later. During his junior year at Baylor he joined the Air Force ROTC and in 1954 received his first commission as a First Lieutenant. He then left Baylor just two courses shy of his masters degree and reported to Ellington Field in Houston, Texas, for flight navigation school.

After one year of training at Ellington, Mr. Salome received his wings and was transferred to Wilmington, Delaware to train WWII navigators in the latest methodology. He flew training missions between the US and Europe for about two years, then returned to Waco to begin his business career. Through a family friend Mr. Salome was hired in 1957 as the new manager at M. Lipsitz & Company, Inc., a local family-owned recycling business in operation since 1895. Mr. Salome was able to learn the specifics quickly and began to implement the modern management methods he learned at Baylor, including a new inventory system for bulk materials. In the 1960's M. Lipsitz expanded and opened recycling centers in multiple towns with Mr. Salome invested into a certain percentage share for each. A few years after the death of Mr. Lipsitz in 1969, Mr. Salome re-organized the company and acquired a 50% share in the company at large. He still manages the company to this day, which is now in a total of nine locations in Texas and Oklahoma and employs around 300 people. With his profits from the recycling industry through the years Mr. Salome began to invest in land and property around Waco and created Tom Salome Real Estate, which today manages twenty-eight properties locally.

Throughout his 50+ years of industrial management experience, Mr. Salome has been a stalwart for greater Waco business interests. He served as chairman of the building committee and lead donor for the capital campaign when the Greater Waco Chamber of Commerce decided to build a dedicated structure in Downtown Waco. The resulting Salome Commerce Center, completed on June 6, 2008, was the nation's first "green" city chamber of commerce building. He also chaired the fundraising drives to construct the East Waco YMCA and the Texas Sports Hall of Fame and to renovate the former Waco Convention Center, now the Extraco Events Center. Mr. Salome has raised funds for or held leadership positions on many other institutional boards, including but not limited to the Waco Industrial Foundation, Texas First State Bank, Baylor/Waco Foundation, C5 Texas Youth Foundation, Dr Pepper Museum, Goodwill Industries, Salvation Army, Urban Renewal Agency, Waco Jaycees and the Waco Business League.

Mr. Salome has also given generously to Baylor University. He offered a large donation to help establish the Entrepreneurship School within the Hankamer School of Business and has also provided financial support to the Mayborn Museum Complex and the Student Life Center. He also donates to local education institutions such as the Reicher High Foundation and the Waco ISD Education Foundation.


Holland  Well, what were your first impressions of M. Lipsitz?

Salome  Well, you know, they hired me, or employed me to become——to be able to manage the company. But, of course, I had no knowledge of the business. So first I had to learn the business before I could become actively involved in the management. And my first impression was, you know, you go to work and you learn to do all the things that there is to do. You learn to weigh, you learn to pay customers. You learn the products, how they’re processed, what their value is, where to——how to ship them. And then in all of the other things that you do in business, such as manage people, manage equipment, purchase equipment, and that sort of thing. And that was my first impression was just to get my——get involved and make mistakes and learn as you go. I have taught many people the same thing that I did. The management people that I hire or I employ are all——were all trained by my company. We have never employed a person who had experience. We always start with someone who had no experience and then we train them in our own method, and that was the method in which I learned, and the method which I have always used in employing other people.

Holland  It seems like with that method that they probably stay with your company longer.

Salome  Well, primarily you look for things that are going to help——hopefully help the most people and the underprivileged. Quite often, for instance with the Chamber, that was not the case. With the Chamber, it was economic development and having an office area that was presentable to the public and to out-of-town people that came here to talk to the Chamber of Commerce. See, we had a rented office over in the Hilton Hotel, and that wasn’t doing very well. And now, we’ve got people who come in here from all over to see our Chamber office. But, you know, you weigh each one of these things. Some of them——most of them are to raise funds for the underprivileged or to build schools or to do something that is going to help the masses. Uh, you know, we’d work on a project for the hospitals. I serve on the Providence Foundation, which is responsible for raising funds for additional items that the hospital can’t afford to do on their regular operating budget. And I don’t know, you just sort of——you weigh each one of these deals as they come up, and decide how much you’re going to——you can afford to put into it, and you go forth with it.


Holland  Is there a certain gift that you’ve gotten the most satisfaction out of?

Salome  No, I get satisfaction out of all of them.

Salome  I don’t have any particular thing that——I will get——tell you one other thing that I do. I help certain students go to school. Now, I get satisfaction out of that. In other words, I have had several students go through four years of college. Most of the time, I try to go to a state school where it’s a little more affordable. But in addition to my own grandchildren, I keep sometimes as much——as many as two and three students in school, going to college, and I do that quietly. I don’t tell anybody about it, and I don’t have a real program. I just take this——the student has to do two things. They have to come into my office and sit down with their grades once a semester and talk to me about it, and talk to me about their plans. And of course, they have to——they——I can’t afford to have them going to school and failing all their subjects. They have to make the grades, but I don’t put a specific minimum on it. But I get a great deal of satisfaction out of having some of these children, these young people go to school where they otherwise probably couldn’t, or they’d have to go take out student loans. I think student loans is the worst thing that ever happened to this country. I can’t imagine a student borrowing sixty, eighty thousand dollars to go to college and then having to face that when they get out at a time where they’re starting out in life. That is tough. But I get a lot of satisfaction out of helping students go to school. I’ve done that with several over the past ten or fifteen years. I’ve had several graduate, and I put my own grandchildren through school, but that’s my deal. That’s private. But not very many people know I do the school thing. I——that’s something I do quietly, and something I——I guess I get as much satisfaction out of doing that as anything as far as making, giving, contributing money.