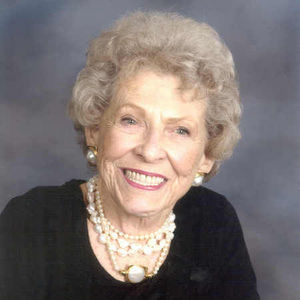 
Lucile Cooper Lacy Taylor was born on Jan. 8, 1923, in Waco, TX at Hillcrest Hospital to Lucile Roane Cooper and Walter Garner Lacy Sr., the youngest of four siblings. She attended Waco's Sanger Avenue Elementary and West Junior High before attending The Hockaday School in Dallas. She then went to St. Stephens College, Wellesley College, and graduated in 1944 from the University of Texas with a B.A. in Art History. At Texas, she pledged Kappa Kappa Gamma and was a member of the FOOS. During WWII she served as a nurse's aide and a member of the Motor Corps who drove the "Gray Ladies" to the VA Hospital in Temple.

In 1945, she met Julius "Red" Taylor who was stationed with the Army Air Corps in Waco. They married on Nov. 17 of that year and moved to his home state of South Carolina for a while before moving back into the Lacys' summer home at Oak Point on Lake Waco with Red working at the Lacy family business - Citizens National Bank. Later the Taylors purchased the Miller Company, and automobile parts business where Red worked as manager.

In 1948, the Taylors welcomed daughter Lucile Lacy, followed by sons Julius Heyward Taylor III, Madison Cooper Taylor (named for her uncle, Madison Cooper Jr.) and Goodwyn Rhett Taylor II. Mrs. Taylor throughout her adult life in Waco was active in the Junior League, was a member of the Colonial Dames, served on the State Board of Easter Seals and the Oakwood Cemetery Board, as well as the Providence Children's Hospital Board. She and her mother helped found MHMR in Waco and she served as President for two years.

Taylor Audio Clip 1
Mrs. Taylor talks about date nights in Waco, where Madison would sometimes play the role of middleman. . .(02:28 )


Sharpless  But how much did you see him in those days?

Taylor  Well, when I had a date.

Sharpless  That’s right, because you said you would come into town. Okay, so tell me how that worked.

Sharpless  Okay, so you were at Oak Point.

Taylor  My mother and father would go to a movie. They loved movies; they had no television. They went to movies. So we would—they would drop—drive by and put me out at Eighteenth and Austin. And Madison and I would have a nice visit. I saw him besides that, but I mean, I did have a nice visit with him.

Sharpless  What kinds of things would he ask a college girl about?

Sharpless  What kinds of things would he talk to a college girl about?

Taylor  I don’t know. Just life. He thought I was a very immature person, which I was. I don’t know—

Sharpless  What did he say to you?

Sharpless  And then your date would pick you up?

Taylor  The date would pick me up and then that would be the last I’d see of him that day, but then I’d come back the next day and have another date and see him again. Some of them he liked and some of them—There was one boy that I dated that he really didn’t like. And Madison and my mother did not get along. You know, that happens in families. And he was so upset, he even called Mother. He said—he suggested that she send me somewhere. But in those days during the war you don’t go anywhere.

Taylor  But, he was—he was a very neat person, very brilliant. I know when he wrote the bookSironia [Sironia, Texas], I had the hardest time reading it because I had never read a book about reality. It had a lot of things in it I didn’t know about and I thought, Oh, I’ve got to read that book. Madison’s going to kill me if I don’t. And so I’d pick it up and read it again. It was a very earthy book, very realistic book, and one of the first type books of that type. Of course now everything you pick up, everything you look at in the paper, every time you see anything—but in those days, that was not so.


Sharpless  Okay. What do remember about Mr. Cooper’s death?

Taylor  Oh, it was just very traumatic. Oh, my word. It was terrible. I remember going to the hospital. He didn’t have to do that; he knew that it would kill him to do that.

Sharpless  To be out running?

Taylor  Uh-huh. They had told him. But he would not be a person that would linger on because he thought he had no one to look after him, and so he didn’t intend to stick around. So I think he purposely did that.

Sharpless  Literally ran himself to death?

Taylor  Yes, he would not be an invalid. He would not.

Sharpless  So what was going on when you got to the hospital?

Taylor  He was dead.

Taylor  I think he died almost immediately as soon as he got in the car. I think he had a massive heart attack or something, didn’t he? Stroke or whatever.

Taylor  I think he did it on purpose in that he would not be an invalid.

Taylor  His death was a big shock, and I was very upset with him because he didn’t have to do that. But that didn’t do any good.

Sharpless  What do you remember about his funeral?

Taylor  Well, you know Madison, he had gone through his father and then his mother’s funeral. I think that the—what are the funeral people called?

Taylor  Undertakers. I think they had taken him. Madison and the Cooper family are Scotch and they have a lot of Scotch blood and I think Madison resented that very much and he wished to be buried in a pine box. He did not wish to be—whatever they do to people.

Taylor  Embalmed. He wanted to be put in a pine box and put in there with a blanket wrapped around him and put in the ground. I think the funeral parlor was so disgusted that they did that free of charge. (laughs) So that’s the way he was buried because he did not believe in all that.

Sharpless  Your family is Presbyterian, right?

Sharpless  Do you have any connect—any memories of Madison and the church?

Taylor  Well, Madison and I would sit on the back row at church. Yes, we saw each other there.

Sharpless  Why did you sit on the back row?

Taylor  That’s where he wanted to sit and it suited me fine. So we sat on the back row. He was not the usual, run-of-the-mill type person. And—

Sharpless  What do you think was most distinctive about him?

Taylor  I don’t know. He was a very handsome man, a very striking man. Not a very friendly person, I don’t think. Marvelous sense of humor, wit.

Sharpless  Can you think of a good example of that?

Taylor  His living, I think. But he did what he wanted to do. He did not do anything he did not wish to do. I know a lovely lady in Waco that kept trying to get—pin him down to dinner parties and escorts and all that, and she never pinned him down. I mean, she was trying to get him to take someone to a dinner or come to her house to dinner and be their escort. I know my husband’s mother—you saw her portrait in the other room—would visit here. And I thought that would be a nice thing to do. Well, he just vanished. He became invisible and he decided that was not for him. I think he knew I had that in mind. (laughs) But he—every time she would come and Margaret would keep saying, “I thought you had an uncle.” And I said, “Well, yes, I do have an uncle, but I’m not sure where he is right now.” So he was not a person that you pinned down, or that you could say, “He’s going to do this.” Because Madison did not do that. That’s the way he was.

Sharpless  Did he let Bertha take care of him?