Pinning & Recognition Ceremony for Class of 2022 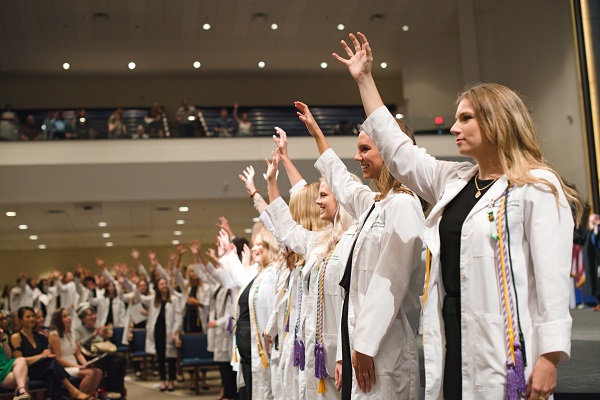 In the spirit of commemorating the success of our 2022 graduates, Baylor University Louise Herrington School of Nursing (LHSON) hosted its Pinning and Recognition Ceremony on May 13, 2022 at 1:30 p.m. at Sunnyvale First Baptist Church in Sunnyvale, Texas.

“Congratulations Baylor nurses! As these amazing students now embark on their professional journey the administration, faculty, staff, and alumni of the LHSON are incredibly proud,” said Linda Plank, PhD, RN, NEA-BC, Dean, LHSON. “Currently, we have 1,478 nursing students through our in person and online programs. From these students 615 of them are undergraduate students, while the remaining 863 are in our graduate programs. This number does not even include our 322 pre-nursing students who are still at Baylor in Waco. We hope to have each of them here with us at the end of their two years in Waco. Finally, we have 77 Certified Registered Nurse Anesthetist (CRNA) students, 22 of which are graduating today.”

Speaking of the CRNA students, this was LHSON’s second year to be joined by members of the United States Army. The U.S. Army Graduate Program in Anesthesia Nursing also known by its acronym USAGPAN is one of many Army-Baylor programs. This Doctorate of Nursing Practice (DNP) program is three years in length, with graduates testing for certification as a CRNA. LHSON is in academic partnership with USAGPAN and admitted its first Cohort in the summer of 2018.

Additionally, an award was given to the student who presented the most Outstanding DNP Project. The winner included: Megan Doiron, DNP-NNP for her project titled, “Point-of-Care Ultrasound for Umbilical Line Insertion: A Quality Improvement Project.”

The next two awards were sponsored by the American Association of Nurse Anesthesiology Foundation. The first award was the Program Administrator’s Outstanding Student Scholarly Project Award was given to: Captain Abby Mitchell, Captain Mark Miranda, Captain Reginald Reid and Captain Brett Hebert, for their group project titled, “Creating a CPG for Assembly of a Draw-Over Vaporizer to USAMMDA-Approved Ventilators.” The next award is the AANAF’s Program Administrator’s Outstanding Student Research Project given to Captain Andrew Blair, Captain Brett Hebert and Captain James Roesner for their group project titled, “A Comparative Study on the Durability of Disposable Endotracheal Tubes After Exposure to Commonly Available Disinfecting Compounds.”

Congratulations also to three undergraduates who were recognized by Baylor University Honors College at their annual Academic Honors Convocation. The nursing students selected for this prestigious honor were Makenzie Bailey, Sydney Hirschey and Peyton Martin.

During this festive occasion, nursing students received their nursing school pin and cords prior to Baylor University Commencement in Waco. Each pin is distinctive; and for the nurse, it also symbolizes honorable completion of a rigorous and physically demanding nursing program. The cords signify membership into Sigma Theta Tau International Nursing Honor Society and for the Baylor Student Nurses Association.

The ceremony offered a Blessing of the Hands given Dr. Sahr Mbriwa, Chaplain, LHSON. The special message represented the blessing of our nurses to be the hands of Jesus to bring comfort and healing to those they care for, and a dedication to a ministry of caring. The memorable day concluded with a group of graduating seniors who led the audience in singing “That Good Old Baylor Line.”

About Baylor University Louise Herrington School of Nursing
The Baylor University Louise Herrington School of Nursing (LHSON) located in Dallas, Texas, was established in 1909 as a diploma program within Baylor Hospital in Dallas, which is now Baylor Scott & White Health’s Baylor University Medical Center, and in 1950 became one of the six degree-granting schools of Baylor University. The first Baccalaureate degrees were granted in 1952, establishing the School among the earliest baccalaureate nursing programs in Texas. In 1999, the School was renamed the Baylor University Louise Herrington School of Nursing after Louise Herrington Ornelas, a 1992 Baylor Alumna Honoris Causa, who made an endowment gift to the School. The LHSON offers Bachelor of Science in Nursing (BSN) degrees through Traditional, FastBacc® (one-year accelerated) and Distance Accelerated BSN programs. Plus, the LHSON offers an online Doctor of Nursing Practice (DNP) program with tracks that include Family Nurse Practitioner, Nurse-Midwifery, Neonatal Nurse Practitioner, Pediatric Nurse Practitioner, Executive Nurse Leadership and U.S. Army Anesthesia Nursing (USAGPAN). The U.S. News & World Report 2022 Best Graduate Schools rankings include several LHSON programs, including the DNP program at No. 60 nationally and “Best Nursing” specialty rankings for LHSON’s USAGPAN, which operates at the U.S. Army Medical Center of Excellence at Fort Sam Houston in San Antonio, at No. 8 nationally, and Baylor’s Nurse-Midwifery program, which is No. 21 in the nation. In addition, U.S. News & World Report 2022 Best Undergraduate Nursing Programs ranked the LHSON No. 58. To learn more visit www.baylor.edu/nursing
Are you looking for more News?
All NewsArchives