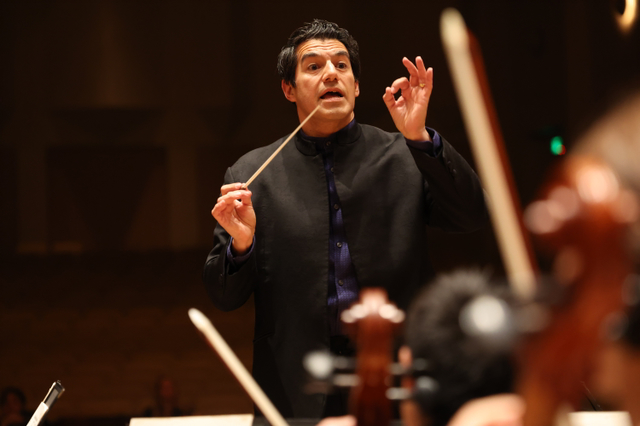 Renowned Maestro Miguel Harth-Bedoya made his debut as only the third-ever conductor in the long history of the Baylor University Symphony Orchestra and Campus Orchestra on Tuesday, October 4, at a packed Jones Concert Hall. The exciting concert included works by Béla Bartók and Pablo de Sarasate, topped off with a rousing Pictures at an Exhibition by Modest Mussorgsky.

Harth-Bedoya joined Baylor School of Music in fall 2022 as the Mary Franks Thompson Professor of Orchestral Studies, succeeding Stephen Heyde, M.F.A., who retired in spring 2022 after leading the orchestral program since 1987.

Since 1944, the flagship Baylor Symphony Orchestra has had only two permanent conductors: founding director Daniel Sternberg, Heyde, and now Harth-Bedoya. The exceptional quality of the orchestral program speaks volumes about the levels of commitment to Baylor and dedication to the musical arts.

"Miguel is following in the legacy of Stephen Heyde's long tenure as the conductor of the BSO," said Dean Mortenson. "His lifelong commitment to studying and conducting orchestral repertoire allows him to bring great wisdom and experience to the podium."

Baylor's academic reputation and values, coupled with their personal experience as Baylor parents, were significant factors for Miguel and his wife in deciding to join the School of Music.

"We have been impressed with the human quality of Baylor's faculty," he said. "Being at Baylor is a gift for which I couldn't be more grateful."

He has amassed considerable experience at the helm of orchestras, including recently completing tenures as chief conductor of the Norwegian Radio Orchestra—a post he held for seven seasons—and 20 seasons as music director of the Fort Worth Symphony Orchestra, where he now holds the title of music director laureate and will conduct regularly. Previously, he has held music director positions with the Auckland Philharmonia in New Zealand and Eugene Symphony in Oregon.