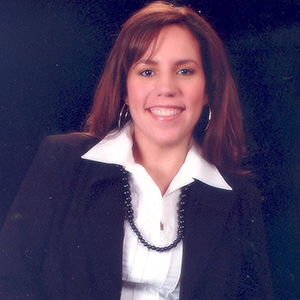 "I have the fondest memories of Baylor, and of the School of Music in particular. I remember feeling so welcomed and immediately part of the culture and community. I always felt challenged academically, but more importantly, I felt cared for. I always tell people that certain professors were like family to me. I do believe the music education department did it's best to prepare me for teaching orchestra. I would recommend anyone who wants a quality education, fine and caring professors, and a smaller, more intimate environment, to attend Baylor's School of Music Education."

Mrs. Brenda Johnson is the Director of Orchestras at O'Connor High School (Northside ISD) in San Antonio, Texas. From McAllen, TX, she received her Bachelor of Music Education degree from Baylor University. Upon graduation, Mrs. Johnson began her teaching career with the Plano Independent School District at Haggard, Carpenter, and Bowman Middle Schools. While teaching in Plano, Mrs. Johnson earned a master’s degree from the University of North Texas in Curriculum and Instruction.

Prior to the 2016-2017 school year, Mrs. Johnson was the head orchestra director at Hector Garcia Middle School (Northside ISD) in San Antonio, TX where she opened the school and established the Gladiator Orchestra program. In their first year as a brand new school, the top Advanced Orchestra received fourth place in the TMEA Honor Orchestra Competition. Each year, both varsity and non­-varsity groups have received Sweepstakes ratings at the U.I.L. Concert/Sight­Reading Contest. Under the director of Mrs. Johnson, the orchestra program at Garcia MS grew to over 250 students.

In her eighteenth year of teaching orchestra, Mrs. Johnson is also an active clinician/adjudicator in the San Antonio area and serves as a cooperating teacher for music student teachers from the University of Texas at San Antonio. She is also consistently invited to conduct All-Region Orchestras around Texas. Last school year, Mrs. Johnson began conducting for the Youth Orchestra of San Antonio (YOSA) Sinfonietta Strings group as well as the YOSA Summer Symphony Strings camp.

In 2004, Mrs. Johnson was one of four teachers in Texas to receive an award for excellence in music teaching named the Majorie Keller Young Music Educator's Award rewarded by the American String Teacher Association (ASTA). In 2008­2009, she received the Teacher of the Year and PTA Life Member Awards at Bowman Middle School. And in 2015-2016, she received the Educator of the Year Award at Hector Garcia Middle School. Most recently, she was chosen for the Kens5/SACU ExCEL in teaching award given to only one teacher in each San Antonio district.