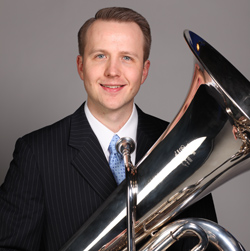 Kent Eshelman is Associate Professor of Tuba and Euphonium. Prior to his appointment at Baylor, he taught at Northern Arizona, Western Kentucky, and Grand Valley State universities. He is Principal Tuba of the Waco Symphony Orchestra and has performed with the orchestras of Grand Rapids, San Antonio, and Toledo. He received his education at the University of Michigan (BM, BFA), the University of Wisconsin-Madison (MM), and Michigan State University (DMA). At UW-Madison he held the Prize University Fellowship and at Michigan State the University Distinguished Fellowship. As a soloist, he has won first place in many competitions, including the Jeju (Korea) and Leonard Falcone (USA) international competitions. In Europe he gave the world-premiere performances of solos by Bruce Broughton and Anthony Plog. His solo CD, Flavors, won the Roger Bobo Award for Excellence in Recording, and he has also released a jazz tuba CD (Life is Good), a brass quintet CD (Four American Stories), and a boogie-woogie and stride piano CD (In the Pocket). In 2015, he received an Outstanding Professor Award from Baylor University.