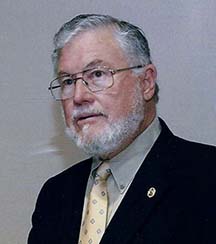 When graduate students exemplify outstanding work on their capstone initiatives (thesis, project, or internship), the Museum Studies Department recognizes that work with its Calvin Smith Award. This is for a capstone experience that goes well beyond meeting professional standards.  It shows a commitment to the project, a desire to be a leader in the museum profession, and demonstrates a mastery of the principles and practices of the museum profession at an exemplary level. Recipients of this award receive a museum publication (book) of their choice and a certificate recognizing this achievement.

These awards are named for Calvin B. Smith, the longtime director of the Strecker Museum at Baylor and the founding chair of the Department of Museum Studies. Calvin was a leading light in the development of the Texas Association of Museums, and took many a van-load of Baylor students to the TAM annual meeting. He was also a museum entrepreneur: it was Calvin who convinced Gov. Bill Daniel to donate his historic village to Baylor; it was Calvin who helped organize the Dr. Pepper Museum and Free Enterprise Institute with Wilton Lanning and Joe Cavanaugh. And it was Calvin who led the charge for the excavation and study of the Waco Mammoth Site; the work of Calvin and his colleagues laid the ground-work for the creation of today’s Waco Mammoth National Monument. Calvin Smith is truly a legend in the museum field!