The team will be honored at a reception from 2-4 p.m. Wednesday, Feb. 28, in the White-Beckham Room of the Bill Daniel Student Center. Baylor President Robert B. Sloan Jr. is scheduled to attend to congratulate the team.

The Baylor team had the honor of representing the United States at this year's eighth annual competition. Having earned the Outstanding Delegation Award in both 1992 and 1994, the Baylor team had a history of strong performances. As a result, the team was selected to represent the United States, the competition's highest honor, to compete against more than 200 major universities and colleges in mock United Nations discussions.

"Even the students that did not win individual awards contributed to the overall performance of the team," said Dr. Linda Adams, assistant professor of political science and sponsor of the Baylor team. "This is a very intense conference that started Thursday morning, ran late into the nights with various committee meetings, and finished Sunday morning."

Out of 20 Baylor delegates, 15 had never been to a university-level model U.N. competition. "However, this was the best prepared team we have ever taken to the conference," Adams said. "We knew we were representing the United States and that we had to know United States policies, because everybody else would know the United States position." 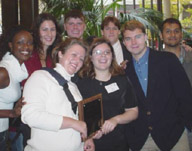 Baylor's team competed against 50 universities from across the nation including universities such as Stanford, Georgetown, University of Chicago, Princeton and Yale.

The Baylor team has a distinguished record of individual and overall team awards, but this is the first Best Delegation award at the University of Pennsylvania Conference in the team's history.

The Best Delegation award is based on the cumulative number of individual awards received by team members plus the overall performance of the entire team. Of the 12 delegates, seven won individual awards. Those receiving awards were Chris Allen, Rosica Popova and Musheer Kamau for Best Delegate, Steve Lichty and Sushmita Dhar for Honorable Mention, Sam Murchie for Outstanding Delegate and Angela Hackett and Raymond Fogg for Verbal Accolade.

"Three factors contributed to the success of our team," said Konitzer-Smirnov. "First we had a strong group of returning veterans along with an extremely talented Head Delegate. Second, we were blessed by an outstanding group of newcomers - some of the best the team has seen in years. Third, we reaped the fruits of the previous leadership - strong organizations don't spring out of the ground overnight."

In February 2004, the Baylor team will travel to Boston to compete in the Harvard University National Model United Nations competition. 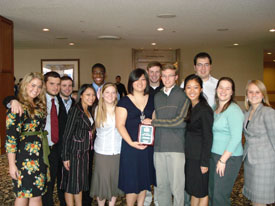 Baylor's Model United Nations team won several awards this weekend in a competition held at the University of California at Berkeley. The team won second place for small delegation, and half of the team members brought home individual awards.

"Considering half of our team were freshman or it was their first time to compete, I think it says something about the team," said Austin junior James Nortey, who won Best Delegate. "I think we have the potential to be a really competitive team."

Nortey said it was his first time to compete in Model United Nations and that he hadn't heard about the competition until recently.

Team members first tried out to join Baylor's Model United Nations team and then competed again to earn a place on the traveling team, which went to the Berkeley competition.

"We have a great team, but the students who went really had to work hard to get there," Kim said. "I think we really have the potential to start getting more consistent awards."

Model United Nations members compete both as teams and as individuals during the competition, Kim said. They are judged on debate skills, writing resolutions, parliamentary procedure, diplomatic relations with other committees and knowledge of international politics.

It's more than just debating. You have to have general knowledge of how the U.N. works," Kim said. "You have to keep up with current events and know how things factor into what your country is going to do."

Turner said he enjoys the competition because of the experience he's gained as a team member.

I enjoy it because it gives you a greater understanding of how the real U.N. works and gives you experience of life and how real diplomacy works," he said.