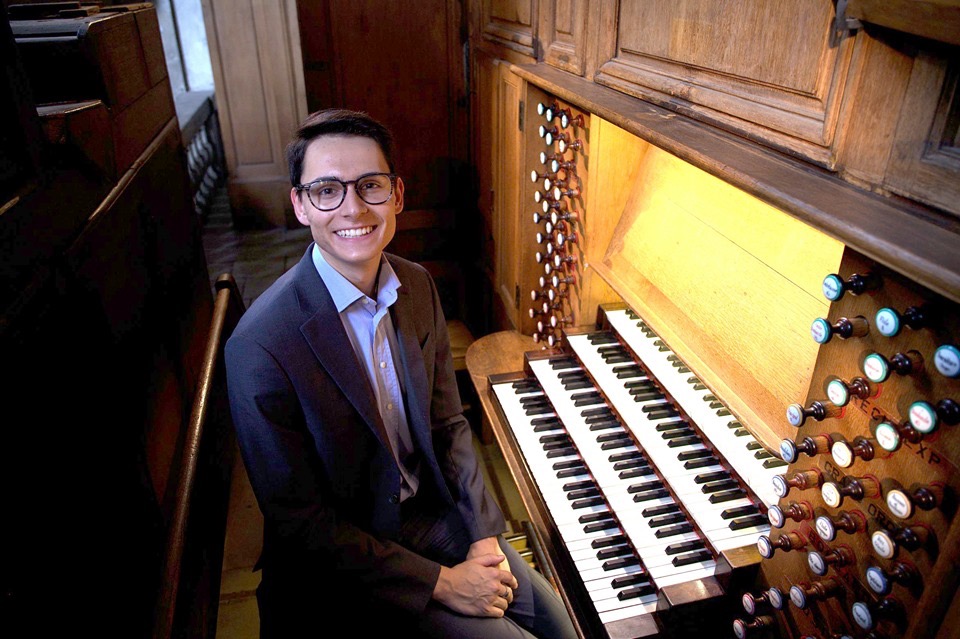 Jared Cook (pictured at the cathedral in Nancy) is a Senior from Houston Texas majoring in French and Organ Performance. He decided to study French because as he already speaks Spanish and he became fascinated with French and Francophone culture. Jared had been attracted to the organ since he was a child. “I was exposed to the organ in church growing up, and loved the power of the instrument.” He began formal study of the organ in his junior year of high school. “I had a strong piano background that really made the transition to the organ a lot easier.”

As a result of auditioning at Baylor, he received a full scholarship to the university.  While at Baylor, he was able to meet renowned organists from France and all over the world who came to give master classes as guests of the university. He later kept in contact with these artists and even developed personal and professional friendships with them.  He was thus able to study with Johann Vexo, the Choir Organist at Notre-Dame de Paris.  While he was studying with the Baylor in Paris program in the summer of 2018, Jared studied once or twice a week with M. Vexo at Notre-Dame de Paris, Notre-Dame-des-Blancs-Manteaux in Paris, and the cathedral of Nancy in France.

In addition, Jared has had the opportunity to play organs in other famous venues in France, including the Palace of Versailles, l’Abbaye de Saint-Ouen in Rouen, the cathedral of Sainte-Croix in Orléans, and the cathedral of Notre-Dame-de-l’Annonciation et Saint-Sigisbert in Nancy. Jared returned to France twice this summer to study organs in Toulouse, and to perform a solo recital at the cathedral in Nancy.

Jared has enjoyed his studies in French at Baylor and feels that his courses in French Conversation and French Grammar have helped him develop confidence with speaking and enhanced his fluency. He profited greatly from having to constantly talk to people, including his host family, during his participation in the Baylor in Paris program.  After his graduation in May 2020, Jared hopes to pursue a graduate degree in music or begin a career in the airline industry. He rates the French faculty at Baylor as second to none, affirming that they have “really helped me develop a passion for the French language and culture. I'm extremely grateful for the opportunities they've given me.” 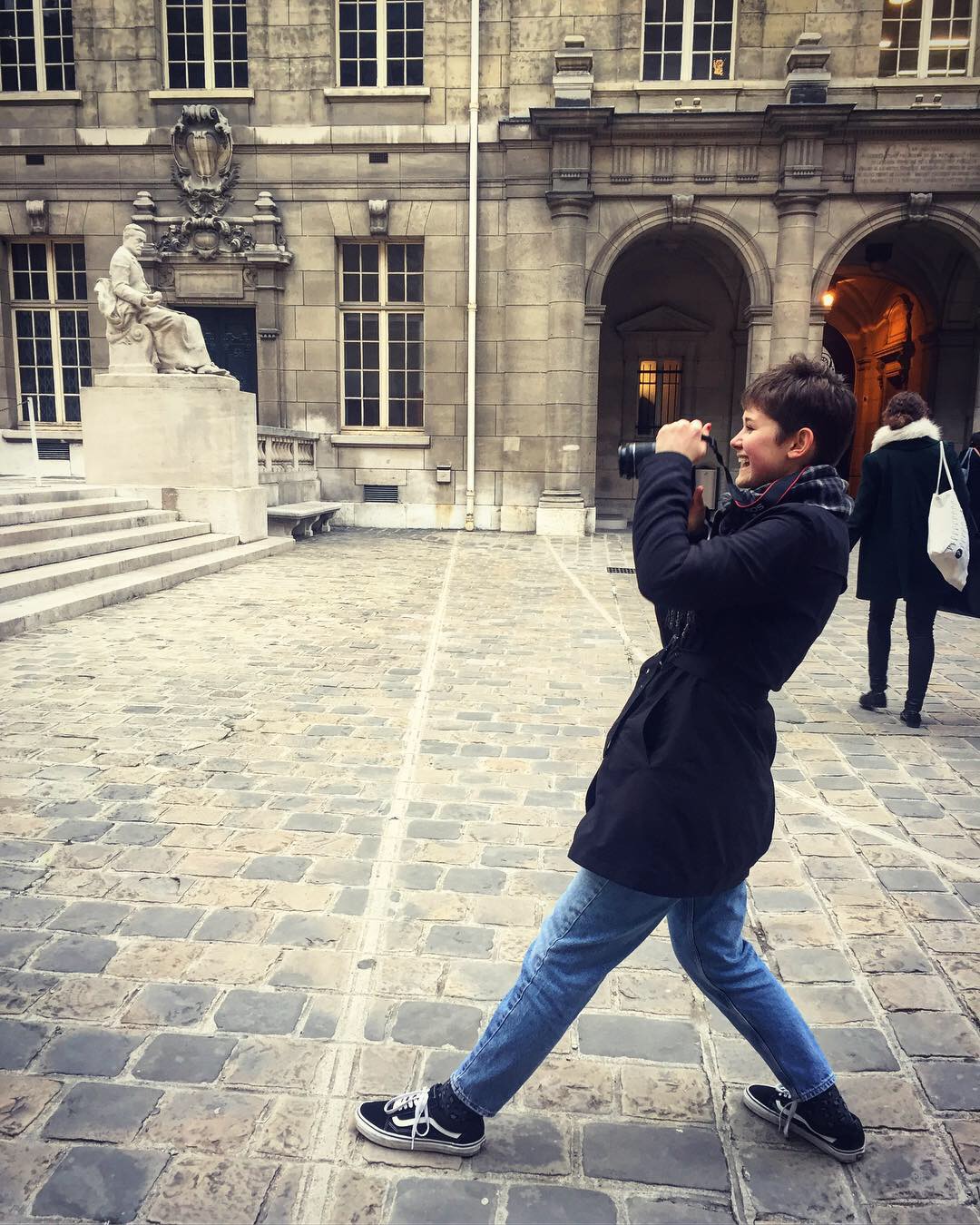 Born in Leesburg, Virginia and raised in Columbus, Ohio, Sarah Carr (pictured at the Sorbonne in Paris) considers the Midwest home. Sarah graduated in May 2019 with a major in French and Spanish. Her passion for languages instilled an intense desire in her to study abroad—first in Madrid, Spain in the spring of 2017, and then in Paris, France in the fall of 2018. Her two experiences abroad differed greatly, but she was impressed by how much national identity influenced personal identity, especially in France. This insight made her reflect on what it means to be an American and how her own nationality influences her identity.

Speaking about her interest in languages, Sarah said, “Language is such a critical tool for cross-cultural communication, and once my Spanish speaking friends helped teach me that, I decided to also study French in order to delve deeper into one of my other passions, art (particularly cinema). French culture is rich and vast, and since French is spoken throughout the globe, I now have a key to open doors outside of France.”

"Some of my favorite classes at Baylor were French Cinema with Dr Bratu and History of Paris with Dr Uber, because the material we covered was incredibly relevant to my semester in Paris.  These classes enriched my appreciation for the city and the cinematic heritage there."

Upon graduation, Sarah will return to Columbus until October. She will leave for France again to become an assistant teacher of English at a school in Orléans through T.A.P.I.F., the Teaching Assistant Program sponsored by the French government. Her long-time goal is to teach French and Spanish in an immersion school or a university. She thus hopes to help shape the next generation into becoming passionate and bilingual global citizens.

Looking back on her time at Baylor, Sarah realizes the tremendous importance of community. She sees the French faculty as being truly instrumental in expanding her horizons and motivating her to grow. She believes that she would not be where she is today if it were not for them. 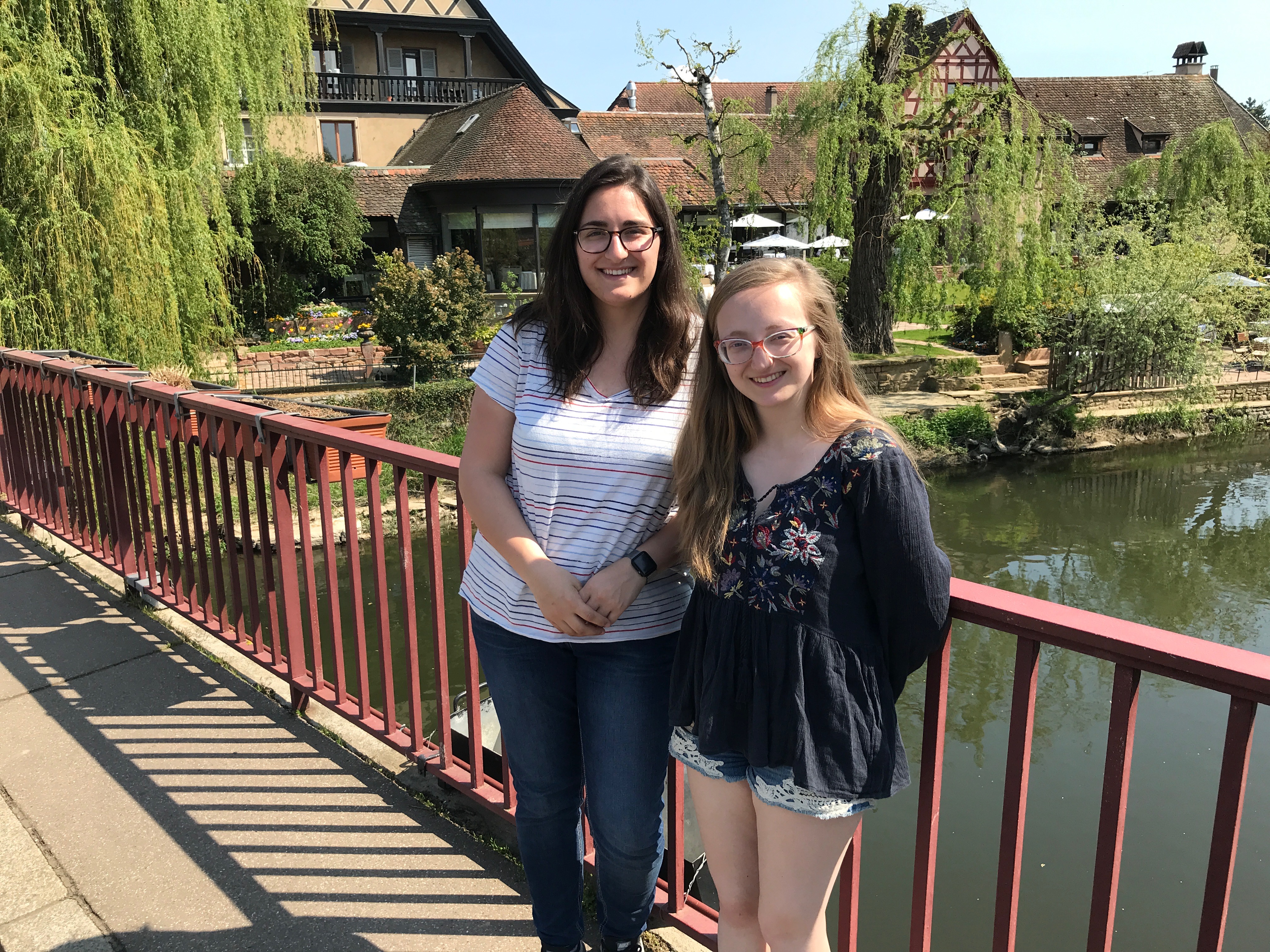 Ashley Dyer (pictured on the left in Elsenheim, France) was born in Chicago and grew up in Colorado. She graduated in May 2019 with a 4.0 grade point average, a double major in French and Political Science, and a minor in Anthropology. Her interest in French began at a young age. She explains, “I appreciated the beauty of the French language and longed to learn more about it. After taking French classes in high school, I discovered a passion for the language and the culture and decided to pursue this interest further.”

During the spring semester of 2018, she studied in Normandy through Baylor’s exchange program with the University of Caen. She also took part in an archeological dig in Viterbo, Italy with the Baylor Archeology department in summer 2017 and summer 2018. While in France, she came to appreciate the less stressful mode of living that the French enjoy and has adapted that mindset to her own life here. Ashley was selected as an assistant teacher of English through T.A.P.I.F., the Teaching Assistant Program sponsored by the French government. She will leave for France in October to begin teaching at an elementary school in Nantes. After her year in France, she will return to the States to pursue a graduate degree in Political Science in order to work in international relations or foreign policy. Aside from her career, she hopes to continue using her French when communicating with the friends she met while studying in Caen.

Looking back on her four years, Ashley says “Studying French at Baylor has allowed me to broaden my mind and develop a more nuanced cultural understanding of France and the French language. Language is powerful; it influences how we think and through which perspective we view the world. My French studies at Baylor have prepared me to identify and fully appreciate this perspective in a way that deeply enriched my time spent in France.” 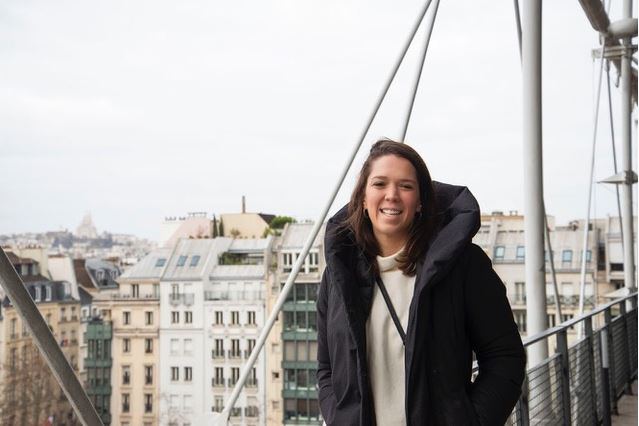 Annalise Franchina (pictured at the Musée Pompidou in Paris) is from Charlotte, North Carolina and has also lived in New York City. She graduated in May 2019 with a double major in French and Mechanical Engineering. She began studying French when she was 10 years old. “The more I studied it, the more I loved it,” she said. “I couldn’t give it up when I started college!”  In her opinion, “Having competency in a second language is an invaluable skill.” During the fall semester of her junior year, she studied in Paris with Baylor’s CUPA (Center for University Programs Abroad) exchange program and lived with a Parisian host family while there. Speaking of her experience, she says, “I loved my host family and all the people I got to meet! Living in Paris for such an extended period of time showed me what European life was really like. I was able to enjoy it from the vantage point of someone who is not just a tourist, and I now know Paris like the back of my hand!” One of her favorite courses at Baylor was the course on Paris, because she saw it all come to life when she lived and studied there.

Annalise will now be working in Dallas as an analyst at Goldman Sachs. “I’ve loved my time studying engineering, but I’m ready to apply those skills in a different way at a financial tech firm.” Later on, she would like to go to graduate school for biomedical engineering in order to work in the creation of medical devices. In any case, she will always take the opportunity to visit France whenever she can. To maintain her French, she will join the Alliance Française in Dallas, and she continues to use the RFI app to listen to French radio. Her dream would be to work for a French company someday. Looking back on her years at Baylor, Annalise believes, “studying French has provided a balance in my studies with Engineering. It has been an incredibly valuable experience and has given me the skill of translation which I have appreciated greatly when speaking technically with non-engineers.”