Short-Term Mission Trips: Are They Worth the Investment? 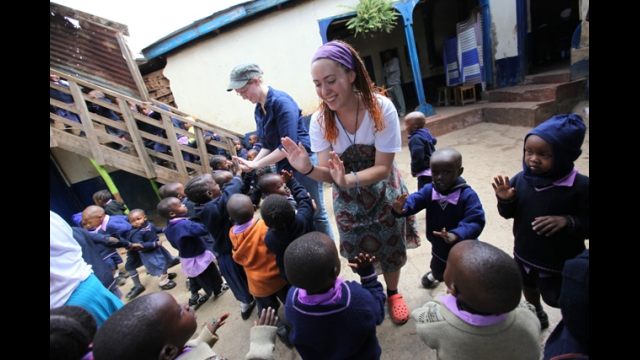 In May 2010, a team of nine Baylor University social work students and alumni and three faculty/staff members traveled to Nairobi, Kenya, to see first-hand how social work skills can be applied to global problems such as poverty and children made vulnerable by AIDS and other diseases.
Tweet
May 2, 2011

If Jesus' Great Commission to "Go ye therefore, and teach all nations" were viewed as a business, it would be booming -- at least in terms of short-term mission trips.

The number of United States Christians taking part in trips lasting a year or less has grown from 540 in 1965 to an estimated more than 1.5 million annually, with an estimated $2 billion per year spent on the effort, according to Missiology journal.

But is the profit worth the investment?

Researcher Dr. Dennis Horton -- an associate professor of religion at Baylor University and principal investigator of a study on the effects that short-term mission trips have on mission team members -- gives the question a qualified "Yes."

Some who study the efforts have suggested the money might be better spent giving directly to a country's Christian partners for spreading the gospel and offering medical aid, construction assistance or other help. Some long-term missionaries even have complained that culturally insensitive short-term mission participants do more harm than good by damaging relationships that had taken years to build.

But the study showed that students who participate in short-term mission trips tend to have lower levels of materialism, greater appreciation for other cultures and a better understanding of missions as a lifestyle. In general, the greater the amount of trip experience, the greater the impact in all three areas, he said.

Two-thirds of short-term trips last two weeks or less, with a host of purposes ranging from evangelism to digging wells or teaching English as a second language.

The trips seem a win-win-win: for those who send participants, for team members and for host countries.

"But I'm qualifying that by saying I think a lot of churches and groups need more follow-up to help mission team members incorporate what they've learned on their trips into their daily lives," Horton said. "Long-term involvement, whether global or local, is where you see transformation taking place."

About 600 students, most from Texas universities, and 48 short-term mission trip leaders participated in the study conducted by Horton and four Baylor University undergraduate research assistants (Claire Aufhammer, Matt Berry, Daniel Camp and Amy Rozzi). Horton, associate director of ministry guidance at Baylor, was pastor of a church in Hong Kong and taught biblical courses, theology and English in the 1990s at universities in Hong Kong and Thailand.

For long-term effects on those who go on short-term mission trips, some studies show little difference between those who have participated short-term trips and Christians who have not, he said. Patterns are similar in terms of giving, materialism and believing one's culture is superior to others.

What makes a difference, according to virtually all studies, is pre-trip training, on-site mentoring and follow-up after the trip, Horton said.

"We appreciate the zeal (of students)," he said. "They want to be on the streets evangelizing. They say, 'We need to get out there and share the gospel!' But the missionaries are saying 'Wait a minute.' In many countries, the most effective way to reach others is through friendships built over time, not quick presentations of the gospel that can endanger the work and lives of long-term missionaries and local Christians.

"The study shows that many short-term mission trip leaders are doing a much better job training their team members about cultural issues and connecting with host countries," Horton said. "They're doing a lot of things right and learning from past mistakes."

But researchers found that post-trip follow-up by team leaders, usually from churches, schools or mission agencies, falls short when it comes to aiding team members proceed from the trips to a missions lifestyle.

"The desire is to ensure that short-term mission experiences become more than spiritual tourism in which participants travel to an exotic place, take a myriad of photos and return to their relatively isolated home environments as well as their pre-trip behavior and routines," Horton said.

That means more than online contact or periodic reunions, he said. Churches, campus ministries and Christian colleges that offer coursework can play a huge role.

In their study, Horton and his research assistants surveyed students with different amounts of short-term missions experience, and some with none, about their levels of materialism, ethnocentrism and interest in long-term missions or ministry.

Many people commit at Christian youth camps to become missionaries, Horton said, but "some find out a little bit more and say, 'Oh, that isn't for me. I can do this for a few weeks, but I like my technology, my comforts.' It wasn't that they didn't still have an interest or wanted to work with local missions. But as far as vocational missions, they need to have a definite call and realize this is how God can best use them."

Some opt against career mission work when they see the reality.

"In some countries, there are immediate responses to the gospel, with hundreds of people becoming Christians, but in other countries, you could work for years and have only one or two convert to Christianity," Horton said. "Students hoping to see instant results on a two-week trip may become discouraged in these areas where people need more time before responding positively to the gospel."

Chelsea Nuttall, a Baylor sophomore English major from Sugar Land, Texas, said she learned from her trip that "missions can be anywhere; it's not just going global."

Dr. Rosalie Beck, an associate professor of religion at Baylor, sees short-term missions from two perspectives. She served in Vietnam in the 1970s, providing support services to missionaries, and has friends who are career missionaries.

"It's a qualified 'yes' as far as the missionaries go, related to adequate planning," Beck said. "Even if the missionaries love having the short-term team members there, it can be disruptive as far as time and on finances that already may be troubled."

As for short-term mission team members -- regardless of whether they become vocational missionaries -- "they'll be forever changed by the experience," Beck said. "They'll encounter the world in a way they never have before and may never again. It will deepen their commitment in the faith and open their eyes to the reality of life elsewhere in the world. Short-term mission trips - whether for a week or two years - will make you a good voice for missions in your church for the rest of your life.

"The trip makes you realize the apathy we have is more spiritually deadly than the poverty you find in some parts of the world," she said. "But there's something magical about a good mission effort, about knowing you've planted seeds God can use."

That was the case for Matt Lewis, a Baylor sophomore communications major from Jacksonville, Texas. He worked with youth on volunteer student mission trips to the Czech Republic in 2007 and 2008.

Between trips, he said, "I spent a lot of time in prayer and really tried to meditate and listen to what God was trying to say to me . . . I got to reconnect with some of the youth there from the previous summer. It was great to see that the decisions they made the last year were still apparent in their lives. Seeing this really reinforces my belief that God is calling me into the ministry."

Of the 32 students who were interviewed after their trips, 29 said the trips had changed the way they see other cultures, with 17 mentioning increased respect and concern.

Almost half said they were less likely to see their culture as inherently superior. Most of the students who had been exposed to poverty on their trips said they had greater appreciation for what they have -- or even disgust for American greed -- but only a few mentioned concrete steps they had taken to lessen their materialism.

The study was presented recently at the Southwest Regional Conference on Religious Studies held in Irving, Texas. It was funded through Baylor's Undergraduate Research and Scholarly Achievement program.